“Be brave, go for the wildest dream”

It is 5pm on a Monday. Tamara Rojo, Lead Principal dancer and Artistic Director of the English National Ballet (ENB) is sitting at her desk at the ENB in South Kensington after a long day of rehearsals in the studio. When we meet there is a pile of pointe shoes in the corner of her office; she explains that the company is about to go on tour again the following week.

Despite being one of the most recognised faces in the dance world, Rojo has a laidback and peaceful nature. Eloquent, serious, phenomenally clever and quick to laugh – with a great contagious giggle – her words are as well articulated as her movements on stage.

The Spanish dancer took over at the ENB in 2012, at a time of savage cuts to arts council funding, when the company was in dire straits. She shook the company up and gave it new life, bringing a new international classical repertoire to the UK, supporting the work of established and emerging artists, collaborating with contemporary choreographers – most notably Akram Khan – and even taking the company to Glastonbury.

“It has been a lot of work, many long days and sleepless nights,” she explains. “I had a clear vision. I knew the organisation well, I had been a dancer here, I understood the structure both financial and artistically and I saw the potential,” she adds. Where others saw problems – the ENB is a touring ensemble with no home theatre – Rojo saw an opportunity. “A touring company gives you flexibility, it allows you to target different audiences and it helps develop artists within the organisation. When you have a venue, you often have to rotate the repertoire so fast that you can only use dancers that are really ready; there is not time to develop talent,” she says.

In these four and a half years as Artistic Director, Rojo has managed to give the ENB a clear identity. “Bigger companies such as the American Ballet Theatre and the Royal Ballet, even Bolshoi, share the same choreographers; you hear certain names being consistently repeated. There was an opportunity here to make a dynamic company that could be very different from others,” she says. The ENB Autumn season will include La Sylphide, Kennet MacMillan’s Song of the Earth, Romeo & Juliet and Akram Khan’s Giselle, which starts in September and is already sold out in London.

The company moves offices in Autumn 2018. London City Island will house both the ENB and the ENB School. “We will have a dance lab, not a proper theatre but a full stage with 170 seats, with lighting capabilities, a full tower and a rig,” says Rojo. This will allow the company to develop their new productions to the highest level and to meet audience expectations. “In the ballet world, companies often spend almost £2m on a production and then give themselves three days on stage because it is too expensive,” she says. “In Manchester when we did Giselle we had two weeks of previews. This is how it should be done”.

Rojo discovered dance when she was five-years-old, during after-school activities which she took part in while her mother was working. “One day, it was raining and my mum was late. The ballet teacher saw me and told me to come into the school gym. They were doing ballet and I fell in love with it. I did not know what being a ballet dancer was; I thought it was just doing ballet class and that is all I wanted to do,” she says. “If I was not a dancer, I would love to write – that would be amazing. I would love to be able to create stories but I am not sure I have the talent.”

When she is not with the ENB Rojo enjoys going to the theatre, cinema and exhibitions, but struggles to see everything she wants to see. “I always feel that I am missing out,” she says. “You constantly hear ‘You have to see this’ and you think ‘when?!’. What a struggle to have, uh?” she smiles.

Rojo decided to move to the UK after seeing the repertoire of Kenneth MacMillan. Galina Samsova, director of the Scottish Ballet, gave the dancer her first international opportunity, opening many doors. She remembers advice given to her by Michael Kaiser, Executive Director of the Royal Opera House at the time she joined. They worked together for only six months but connected straightaway. “He said to me when I started, ‘be ambitious, go for the wildest dream” and I thought to myself, ‘this is insane; you have to have a hint of realism’, but you don’t! So far I have managed to go for the wildest dream”, she says. “If you are driving an artistic organisation, be brave. Do not compromise on the ideas and do not have a hint of realism; you might have to compromise on the way of delivering them but do not compromise on the vision”.

Rojo has made a conscious effort to support the work of female choreographers – with She Said, a triple bill at Sadler’s Wells. “By the time I came to ENB, I realised I had never performed in a ballet created by a women. I thought that could not be right,” she says. “Now more and more people are looking for female choreographers. I hope no one can finish an international artistic career of 20 years of professional dance without having performed in a ballet created by a woman. I hope that never happens again”. ENB won an Olivier Award in April this year for outstanding achievement in dance and for expanding the variety of its repertoire with Giselle and She Said.

A prominent public voice in the arts, Rojo sits on many boards, such as the Arts Council England and  One Dance UK, but is frustrated by the Spanish arts world. “I hope that at some point I read in a political manifesto something about culture that gives me hope,” she says. She believes that the Spanish political class, regardless of ideology, should promote arts and culture in a transparent way with an “arm’s length” consistency – culture serving society beyond a specific political agenda”. Rojo explains how revolutionary the creation of the Arts Council was in the UK after the second world war, and how policies of philanthropy and tax deductions helped balance the cuts on public funding.

“I just wish that culture in Spain had the commitment of the political class,” she says. “In the UK, and also in other countries with good models i.e. Canada, the creative industry is not only thriving but one of the motors of the country; it creates jobs and continues to grow even in crisis. It attracts tourism, it connects industries, hotels and restaurants, publishing and textiles”.

She urges Spain’s politicians to think about the benefits of art and culture to the country’s economy, its international reputation and soft diplomacy. “Even the coalition government in the UK, that had to face the biggest cuts, recognises that the arts will not be cut as it drives the economy,” she says. “I just wish our Spanish government, whatever ideology they defend, could come to an agreement on this for the benefit of Spanish society. “I can only keep saying it… again”.

Rojo mentions the lack of collaboration among Spain’s Autonomous Communities that could do better at sharing expenses when there is a company on tour, and feels there is a lack of infrastructure and vision in Spain. “We are such a musical society, we dance all the time – just think about all the festivities in the villages. People embrace art but successful art projects only happen because there is a bunch of devoted individuals that really fight for it, to the bones. When individuals disappear, the whole project disappears with them because there is no support or direction, there is no plan,” she explains.

She talks about Brexit as a sad moment for many. “We don’t really know what Brexit is and that is worrying,” says Rojo, referring to a white paper published by the Creative Industries Federation on the possible consequences¹. “Brexit will affect not only the ability to bring in talent but also in the free movement of talent that has made London the cultural capital in the world,” she says. “If I was in Spain I would take the opportunity to become the cultural capital of the world”.

At 42, Rojo is quietly winding down despite being in perfect physical condition. “There are some roles that I do not do anymore and I am happy with that. Not everyone has the luck to have this transition at the speed they choose in the manner they choose. I am very lucky,” she says. When asked about the possibility of her returning to Spain, she says she would only go back to create a National Arts Board (Consejo de las Artes) but does not envisage that happening in the short term. However, it is not her style to give up.

¹ Middlesbrough, L. (2016) The impact of leaving the EU on the UK’s arts, creative industries and cultural education – and what should be done: Brexit report. Creative Industries Federation   https://issuu.com/lovemiddlesbrough/docs/creative_industries_federation_-_br/3 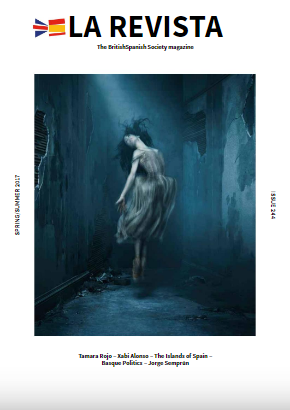 Isabella of Castile by Giles Tremlett