By our social correspondent

As our  very own  arts guru  Paul Pickering  reminded us,  London’s National Gallery is ‘teeming with art’ ,  and ‘many walls remind you of Christ and the Saints’. This incomparable cultural meeting point  in London’s Trafalgar Square, where visitors from all nations gather, Puritanism has thankfully  come and gone, while the imagery of the Counter-Reformation , to which we owe South Europe much thanks, endures.

The  latest Pickering tour , timed appropriately  ahead of  the Christian Easter, took us  direct to a masterpiece: the Italian painter and architect of the High Renaissance Raphael’s  The Mond Crucifixion.

And there Pickering effortlessly  drew us into the canvas with  his expert’s eye. It is study of striking contrasts-the dancing  angels closest to the dead Christ-  as well as of  sublime harmony in colour and symbolism. . There is a  pervading serenity as the dark cross rises through bareness to  golden hills and up to the skies where the sun and the moon preside over the cosmic event of the death of their Creator.

On we went, with further incisive reflections  on Carlo Crivelli’s The Dead Christ, and  paintings by Bellini and Mantegna from the late 15th, early 16th centuries. Pickering talked to us movingly of   ‘life and death juxtaposed’ , ‘art consoling us with its beauty’, before taking us into one of the museum’s larger rooms and an example of ‘art for art’s sake’ in the exuberance of Paulo Veronese’s Dream of St Helena .

By now we were well into a journey without a map,  full of surprises , as Pickering moved from one room to the next,  to identify hidden jewels fir us we might have otherwise overlooked.

Among those most discussed were two magnificent pictures themed around the story of  the thirteenth apostle Mary Magdalene. One had her magnificently  translucent  as painted by Savoldo . The other  was Titian’s Noli me Tangere, her face full of rapture , ‘literally falling for Him’, and the risen Christ ‘very coy’, telling her, ‘do not touch me’, Pickering commented.

Other paintings by the great master Titian, similarly enthused us. They showed his ‘wonderful imagination , from the Resurrection to Diana’s Hunters’. And  then it was time to bridge our tour with Spain, and one of King Philip 11n’d favorite paintings. Pickering picked on  the striking humanity of  Hieronymus Bosch’s Christ Mocked, contrasting the suffering of Jesus with the cruelty of his tormentors.

Then  less an after-thought  than  a soothing balm, Pickering pointed us in the direction of  the special exhibition at the National Gallery of Murillo’s engaging portraits, also well worth seeing,  with the depictions of a  Sevillean street urchin and Two Women in a Window, real treasures of the best of Spanish art.

Another Five star Pickering show. How lucky the BritishSpanishSociety is to  have  this learned and simpatico  art expert on its Executive Committee, enrich our lives with his hugely original and memorable exclusive tours. Gracias, Paul. Keep them coming. 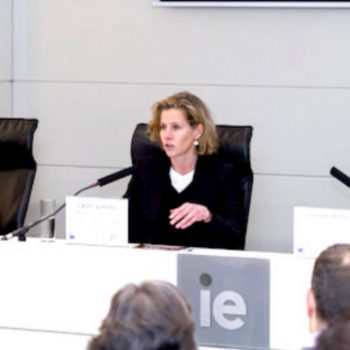