Rod Younger, who died suddenly at his home on the Costa del Sol on June 29th, aged 51, was a passionate Anglo-Spanish follower of Spanish culture, and dedicated to the cause of promoting a better understanding of it among British visitors and residents in Spain.

Despite his British nationality, English accent and sense of humour, Rod was also proud of his Spanish roots, and always happy to share that his real name was Rodrigo Manso de Zuniga Domenech. His father changed it when he went to live in UK in the 1950s .Younger was his mother’s maiden name.

His mixed roots (Scotland-Jamaica-Spain)bi-cultural education and thirty years of business experience in Spain led to the realisation of his dream: the founding of Books4Spain. In recent years he focused all his creative, and commercial energies in developing from his base in Marbella this online bookshop which marketed and traded a rich variety of fiction and non-fiction about or set in Spain, mainly by non-Spanish writers and in the English language.

As he told me once: “I established the business in response to the explosive growth in online mass market “soulless” book retailers, such as Amazon, and the continuing decline of the traditional independent bookshop with knowledgeable staff and an interesting collection of books.”

Rod had a Scot’s passion for adventure while the conduct of a perfect English ‘gent’- cultured and well mannered. He was also muy simpatico , not just with friends but with people he met for the first time. He rarely showed in public the stress he suffered as result of developing Books4Spain in the midst of a major economic crisis. He struggled to get people to read, let alone buy books, and to get the finance to help him do it.

Often it must have felt he was tilting at windmills, but, like Quixote,or indeed Shakespeare, he always tried to keep on dreaming, and was quietly persuasive in drawing people into his project. He did not easily give up, or show himself defeated. Always upbeat and optimistic, Rod never let chronic pain from a medical condition interfere with his heavy work schedule or endless reading list.

Rod was an enthusiastic supporter of the Anglo-Spanish Society,along with other institutions such as the Cervantes Institute and the Cultural Office of the Spanish Embassy in London, contributing to the Society’s magazine La Revista, encouraging literary talent among our membership, and helping sponsor cultural events whenever he could.

The last time we were together was in London last December at the hugely successful event at the Cervantes Institute where I shared a table with the author Marian Dueñas. As chairman of the Society, but also as a personal friend who hugely enjoyed Rod’s convivial and uplifting company, I will hugely miss him. May he rest in peace. Que en paz descanse. 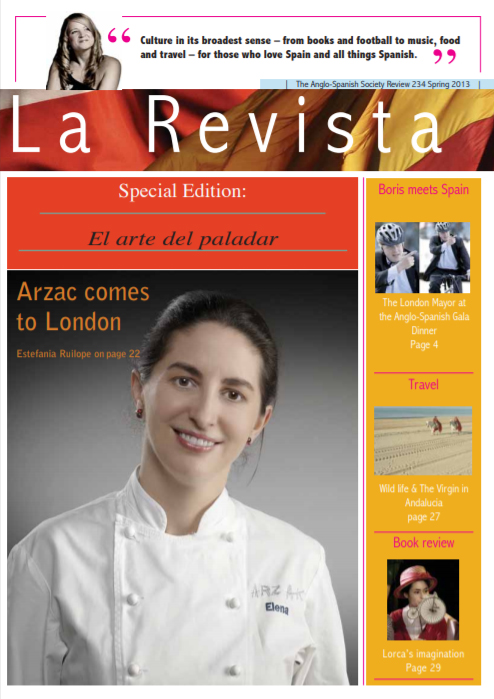