The latest news from the British Spanish Society

Ibérica is committed to bringing only the very best in Spanish gastronomy, wine and culture to the UK through their restaurants. Guests consistently experience the passion and expertise of Executive Head Chef Nacho Manzano, who has an impressive 3 Michelin stars to his name, through the ever-evolving and authentic menus at Ibérica restaurants. Manzano ensures […]
Read More

Dear members and friends, To have a look at the pictures please click here and scroll down the page.   Why not join our membership today? You can find an application form on our Membership page
Read More

Paco de Lucia: The Death of a Musical Wizard

World music is in mourning following the unexpected death , aged 66, on a Mexican beach,  of  Paco de Lucia, one of the greatest guitarist of modern times, a truly musical wizard. Born Francisco Sanchez Gomez, to a Portuguese mother and an Andalucian father, de Lucia (a name he adopted professionally) spent his childhood  in a poor neighbourhood […]
Read More

Presentation of The Odyssey, the acclaimed biography of Walter Starkie

Jacqueline Hurtley joined Jimmy Burns at the Cervantes Institute in London to present ‘ The Odyssey’, her acclaimed biography of Walter Starkie, the controversial Anglo-Irish hispanista and founder of the British Council in Spain. Guests were treated to a fascinating insight into Starkie’s life and career, with stories and anecdotes which painted a vivid picture of the […]
Read More

By Gail Turner Mooney The Hispanic world has lost one of its greats.  Michael Jacobs, who died from cancer on 9 January 2014 aged 61, was an enthusiastic and knowledgeable writer with an endearing personality, in the tradition of George Borrow, Richard Ford and Gerald Brenan. Michael had an extraordinary ability to connect, and both his […]
Read More

By Albertina Torres In 2005, having lived in London for ten years, Albertina Torres moved with her husband, British-Canadian film maker and artist Zev Robinson, back to the small village in rural Valencia where she was born. Three years later, while walking through some nearby vineyards, Robinson came to the realization that many people would […]
Read More 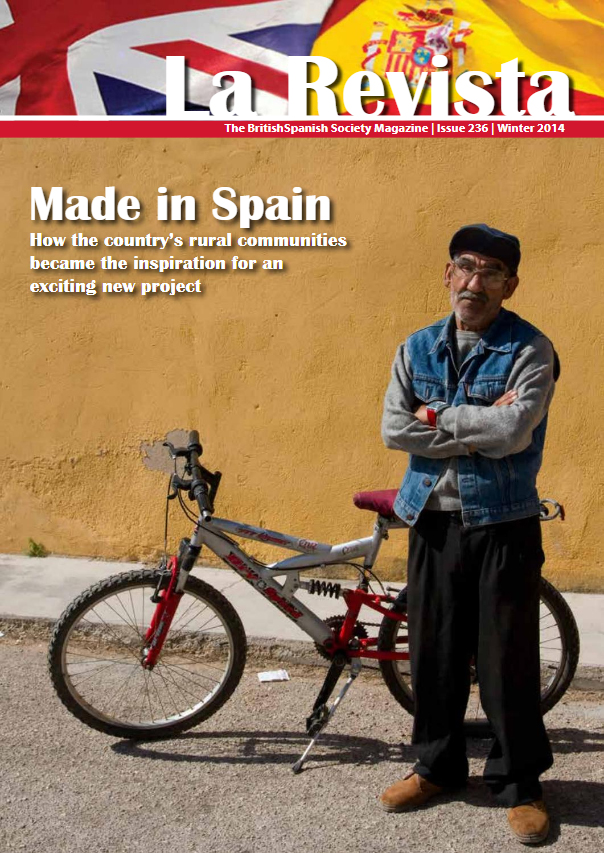 The BritishSpanish Society Christmas Party took place at the Instituto Cervantes in December 2013. It was as anticipated a glamorous evening of sophisticated tapas and drinks created by Ibérica. Wines from Spain contributed with splendid Spanish wines. The raffle prizes were first class including a glorious item designed by Zaeem Jamal, silver membership at Haciendas Zorita, books […]
Read More

The much-loved children’s classic has been translated into Spanish for the first time, bringing Edith Nesbit’s story to a wider audience. We’ll be covering this in the magazine but in the meantime listen to translator and La Revista contributor Nuria Reina Bachot speaking on Spanish radio about why she was inspired to work on ‘Los Chicos del Ferrocarril’: […]
Read More

Share your love for the BritishSpanish Society this Christmas

This Christmas, why not share your love of Spanish culture with your family and friends, giving them the opportunity to meet new people and take part in exciting events while also helping a charity that supports postgraduate academic research and innovation in Spain and the UK. Family and friends of the BritishSpanish Society receive unique access to […]
Read More
Page 22 of 24«‹2021222324›»