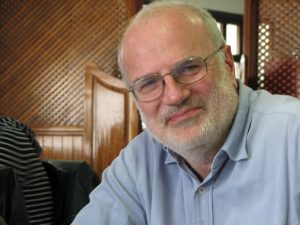 The Hispanic world has lost one of its greats.  Michael Jacobs, who died from cancer on 9 January 2014 aged 61, was an enthusiastic and knowledgeable writer with an endearing personality, in the tradition of George Borrow, Richard Ford and Gerald Brenan.

Michael had an extraordinary ability to connect, and both his art historical and his travel books are full of fresh, lively and entertaining insights.  He had a lifelong passion for Spain, and settled in the village of Frailes in the Provincia de Jaen in 1999,  and there he soaked up and observed the people, atmosphere, sights and food of Andalucía, and wrote about them. Frailes later became his base when he travelled further afield to South and Central America.

He was born on 15 October 1952 in Genoa, Italy, to an Anglo-Irish father, and an Italian mother, who had acted with a Sicilian theatre company in the last years of the Second World War, and from whom Michael developed a passion for food. He was educated at Westminster School and went to the Courtauld Institute, which was then in Portman Square and under the Directorship of Anthony Blunt, to study for his BA and later his PhD in the early 1970s.

Michael was an encyclopaedic scholar but never a conventional one.  A career spent in the confines of a museum or an art history department was not for him (though he was a Senior Honorary Research Fellow of Glasgow University); but he was the author of 24 books. His restless curiosity led him to write early guides to art and artists of the British Isles and artist colonies in Europe and America, before moving on to travel books about places as varied as Provence, Czechoslovakia, Budapest, Romania, Barcelona, Madrid, Andalucía, the Alhambra and the Camino de Santiago. He translated Golden Age plays and began to write more personal books on Spain beginning with Between Hopes and Memories (1994), which caused the newspaper ABC to call him ‘the George Borrow of the High-Speed Train Era’. El País praised him for ‘going beyond the clichés and giving a portrait of the real country’. The Factory of Light (2003) a picaresque memoir written in and about the small village of Frailes, established him as a local celebrity in Andalucia. He participated in conferences, radio interviews, lectured on specialist tours, took part in the Alhambra Hay Festivals and he made many local and international friends among writers, photographers and gastronomers.

In 2006, Michael’s interest was ignited by letters from his Jewish grandfather from Hull, who worked in Chile and Bolivia with the Andean railways, to his grandmother. Michael followed his grandfather Bethel’s footsteps, and wrote Ghost Train through the Andes.  In a major journey in 2010, Michael intertwined geography, history and 19th and scary 21st century revolutionaries together in The Andes. His last book, The Robber of Memories (2013), was a skilful and poignant travelogue down the Magdalena river in Colombia, woven in with the experience of his parents’ loss of memory from dementia and Alzheimer’s, and also the similar plight of his literary hero, Gabríel García Márquez.

He loved cooking and entertaining, and was a member of the Andalucían Academy of Gastronomy. He was the first foreigner to be made a knight of The Very Noble and Illustrious Order of the Wooden Spoon.  He once commented that the food of Spain was the story of Spain. Several of his book launches were held at the restaurant, Moro, in Exmouth Market whose owners, Sam and Sam Clark, were good friends.

Shortly before his death Michael married his long time partner, and first reader of his books, Jackie Rae. He was working on a book on Velázquez’ Las Meninas for Granta.

A measure of how much he was admired and loved in Spain, was that within two days of his death, obituaries were published in El Pais, and in the Granada newspaper Granada Hoy,  praising him as an intellectual full of life, with passion reminiscent of Don Quijote and the good humour of Sancho Panza.

Michael Jacobs will be missed by friends and Hispanophiles everywhere for his energy, love of life and adventure, for his knowledge and learning lightly worn, and for his hospitality, friendship and modesty.

Presentation of The Odyssey, the acclaimed biography of Walter Starkie