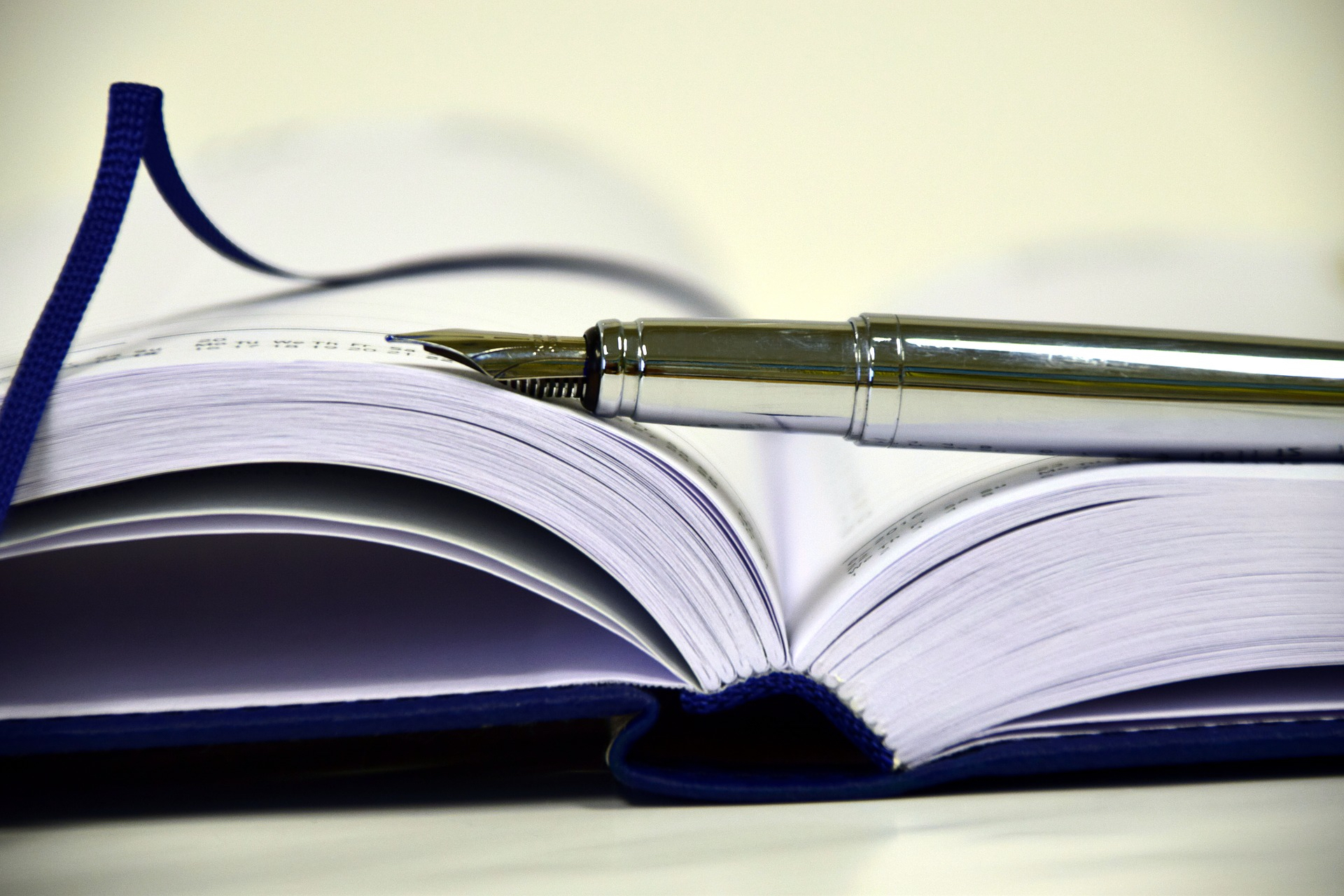 The clocks have gone forward. The days are getting longer. I fetch her a cup of English tea and myself a bowl of Argentine yerba mate and climb back into bed. This has been an enduring ritual of our shared life but all sorts of bonds are having to be reasserted amidst so much falling apart. We take time to savour these moments of physical companionship.

In Battersea Park on my daily morning permitted walk and QI Gong exercises, I come across the first chicks to be born this year-Egyptian goslings having their first lesson on survival from their mum. Their dad patrols the lake, defending a small patch of precious water from a pack of competing Mallards, and the shoreline from a small dog that is off his lead.

In London, as elsewhere in the UK, as the virus spreads heading towards ‘peak’ that might be well below that of Italy and Spain and the US, the struggle is on it seems not just to get our NHS staff properly tested and resourced , but also for the right of the growing ranks of the unemployed to enjoy the green and pleasant land- responsibly, and safely.

Battersea Park police supported by responsible citizens are sharing the stewardship of our local precious green space. Except for the more vulnerable members of the population who have to stay indoors, there is permission for a onece a day communion with nature , on the condition of keeping a safe distance, and doing various forms of exercise to try and keep healthy in mind and body. So far when it comes to Londoners, the common good is prevailing over a minority who are breaching guidelines .

There is frustration, depression, and anger, pain and sorrow as the crisis continues beyond the perimeter fence of the park , outside the public gaze of the community, in cramped tower block flats and care homes and hospital wards. But keeping much loved large public parks like Battersea’s open is so far serving as a life-line rather than a death trap for many Londoners, as long as guidelines are followed.

Heartened to see the calm and proportionate manner two Metropolitan police officers are patrolling on foot along the river side of the Park this morning, focusing on ensuring that no human clusters are formed.

Friends in Spain view my daily photograph record of my wonderings in the park with a mixture of horror and envy-their parks were closed long ago as were their beaches. A friend in lock down in the town of Lleida has taken to spending part of her day reading Don Quixote with her two young children when they are not playing chess. I wonder what imaginary territory we Brits inhabit- or is that we really are destined to be an island race, inspired by the rekindling of a national narrative, that of being resilient and prevailing in previous World wars? The UK lockdown at its best continues to be a real test of policing by consent and democracy and the NHS is just about holding it together as is the general public and the political system. Only time will tell whether other countries got it right, and the UK got it badly wrong, or vice-versa.

I’ve taken to compiling a personal list of unsung heroes I feel a real need to thank alongside the NHS and other emergency and care staff. Today I’ve added Hassan my local postman who delivers connections with his red trolley and protective gloves like a genial Hobbit defying the dark forces of Smaug and the Orcs. He is a reminder that amidst the lock downs and the isolations, there are still good letters to be written by hand, weeklies worth adding to one’s daily reading , news of bills deferred or perhaps not. I look at my diary. It shows that today we booked months ago to start a holiday in Spain- now long cancelled.

The crisis has inevitably turned some uses of social media into a cathartic experience: instagrammed photographs, tweeted messages, Facebook comments, texted videos and animated GIF’s are delivered into cyberspace with greater abandon perhaps than ever, in order to draw a ‘friend’ or follower into one’s moment of discovery whether monetarily joyful , funny, angry, or abusive or devastatingly intimate in the shared moment of pain, and loss. Yes I am complicit in this. In fairness I’ve long considered writing, like painting, and loving and being loved, to be a form of therapy.

The BBC news today is of a rising number of Covid-19 related deaths almost everywhere except China. A message from Madrid, the latest in an ongoing narrative of bad news, informs me that a friend has lost her husband to the virus. Nearer home, in London a former colleague announced on Facebook that his wife has died from a massive stroke while exercising during the lockdown.

While walking in the park, I meet my physio Dario who helped me through a back problem that I developed some years back. We meet in the park at a safe distance. He tells me that he and his girlfriend have just recovered from the virus. It was not pleasant he tells me- the back pain together with the fever, and the loss of taste and smell, and the overall sense of physical weakness but they endured it at home without being hospitalised and are now hugely relieved to have come out the other side.

Then comes the reminder of the magnitude of emotional dislocation of those who have met a different fate. Friends in Spain and the UK write in sharing in the tragedy of those dying of Covid-19, alone in hospital locked away from their loved ones.

Meanwhile there is no shortage of virtual art galleries to look at, songs to listen to, kindle books to read, games to play, puzzles to solve , work or study projects to pursue remotely from home, because we feel we have to feel alive, relevant, , keep a sense of structure, as the darker clouds hover, reminding us of our fragility, the realization that we are all vulnerable.

But this also a time when there is light even in the darkness. A beautiful tribute by Matthew Parris in the Times to his mother of 93 who has died in Catalonia. He quotes from the 17th century mystical poet Thomas Traherne that she always kept by her computer.

“You never enjoy the world alright, till the Sea itself floweth in your veins, till you are clothed with the heavens, and crowned with the stars: and perceive yourself to be the sole heir of the whole world, and more than so, because men are in it who are everyone sole heirs as well as you.”

No it’s not an April’s Fool Day spoof even if life may seem unreal. How loud seem, after an extended peaceful interlude, the planes that have returned to our London skies-thankfully not at the volume of what now seems a long time ago, so that our lungs already at risk from the virus have still to inhale the level pollution of the era before lockdown, and the bird song retains its graceful calling on our hearing if we give ourselves time and space to listen. These flights are bringing home British citizens who have been stranded elsewhere in the world while on holiday and medical and other essential supplies from across the world. Not quite the withdrawal from Dunkirk but the Foreign Office and the flight crews deserve our thanks. Hugh Elliott HMG’s ambassador in Madrid and his consular staff have joined my growing list of unsung heroes.

The pot plants where I sowed some lettuce and spinach seeds just before lockdown, have started sprouting-green shoots. Our youngest daughter meets us in the park , keeping safely at a distanc. The three of us hug trees, identify several birds, , and feed nuts to the squirrels. The swan is nesting on some reeds near the foot bridge, the same place she did last year. Nature has its way of bringing reassurance, as do one’s loved ones.

We return to our house to find that our oldest daughter has supplied us with hot-cross buns and a loaf of sour bread she has freshly baked for us.

At twilight, I have a long phone conversation with an elderly friend, among several I know who are living alone in London. He tells me he is reflecting during Lent on something Graham Greene once said: “I don’t believe in unbelief.”

Saturday April 4th morphs into Sunday April 5th. Weekends no longer define our weeks which seem to move in ways we can no longer imagine , outside the control on our lives we might have thought we once had. How long ago seems just a year ago when I joined the crowds of Catalans waving olive branches and palms at the start of our annual Easter holiday. Spain has cancelled its Holy Weeks processions for the first time since the Spanish Civil War.

At home in London I connect to a virtual prayer and reflection gathering (two unseen but not unidentified speakers, recorded music, and the silence of an church building without a congregation physically present.) courtesy of the BBC Radio Four’s Sunday Service. I find the service offered by a Jesuit priest Fr Dominic Robinson and the nun and theologian Theodora Hawksley in Farm Street Church London hugely moving and uplifting.
Hawksley quotes from the late Dietrich Bonhoeffer ‘Who am I ?’:

“Am I then really that which other men tell of? Or am I only what I myself know of myself? Restless and longing and sick, like a bird in a cage, Struggling for breath, as though hands were compressing my throat, Yearning for colors, for flowers, for the voices of birds, Thirsting for words of kindness, for neighborliness, Tossing in expectations of great events, Powerlessly trembling for friends at an infinite distance, Weary and empty at praying, at thinking, at making, Faint, and ready to say farewell to it all. Who am I? This or the Other?…”

In the evening the Queen’s address to the nation , with perfect timing, connects with the national mood , providing words of appreciation, empathy and reassurance ahead of the news that the prime-minister has been admitted into hospital because of his coronavirus symptoms.

Boris Johnson once again personifies the unpredictability of the times we are living in. Her Majesty, with the wisdom of her 93 years, still seemingly clear headed and virus free , plays to the national narrative, recalling her broadcast to the nation as a young princess in WW2-but only up to a point.

As she puts it, while we the British people have faced challenges before, this one is different.” This time the world is confronted by a common enemy, and we are joined with all nations across the globe in a common endeavor using the great advances of science and our instinctive compassion to heal.” Light in the darkness. Something surely worth aiming for. Good Friday followed by Easter Sunday is almost upon us.

Welcome to the launch edition of Puentes, the BritishSpanish Society newsletter 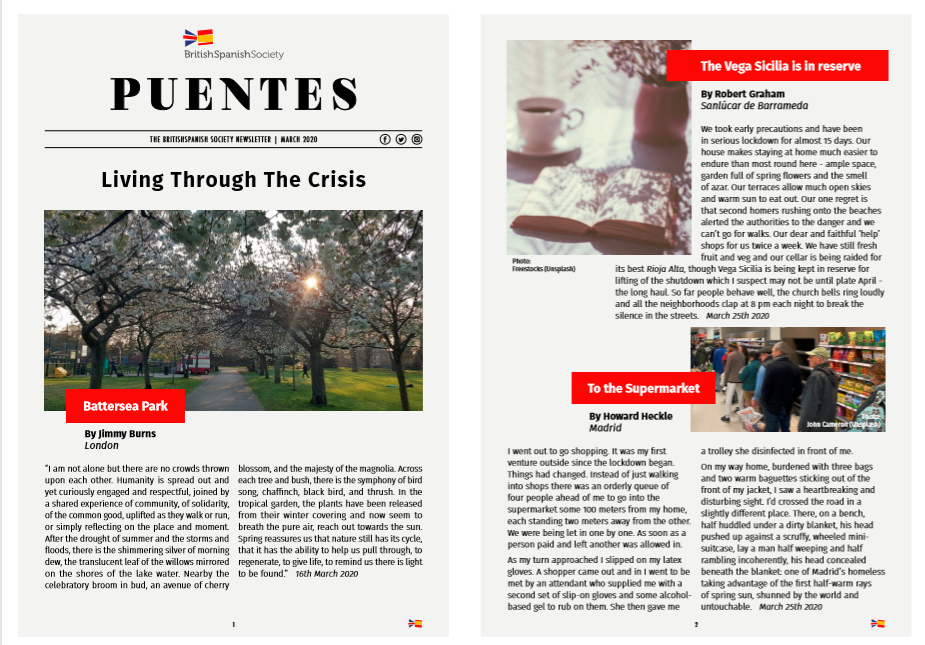 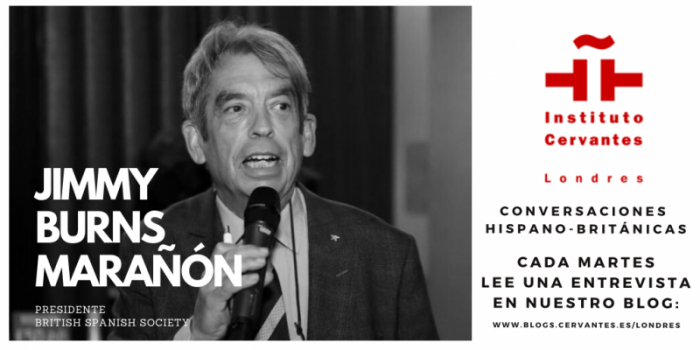