KITE Invest had the pleasure of attending a BritishSpanish Society event in London in March and getting to know the Society’s dynamic organisation and members. The Society’s Chairman Jimmy Burns Marañón spoke to KITE about the longstanding ties and rich cultures of both Spain and the United Kingdom, the Society’s scholarship program and its flagship magazine, La Revista.

KITE Invest: Spain and the UK have an etched out business and investment relationship, has the BritishSpanish Society witnessed any change in cultural and societal relations as a result of the crisis? Has there been a notable difference as Spain emerges from a near bailout position?

Jimmy Burns Marañón: The BritishSpanish Society is a registered UK charity with nearly one hundred years of history. We shall be celebrating our centenary in 2016. Our foundation was thanks to a group of British academics, students and businessmen who extended a hand of social, cultural and trade friendship to their Hispanic counterparts in the middle of the politically challenging circumstances of the First World War.

In subsequent decades the Society endured and sometimes struggled to survive amidst an ever shifting political and diplomatic environment affecting relations between Britain and Spain but its British and Spanish members remained constant in their shared mission to find common social and cultural grounds in which to encourage dialogue and learn the best from each other.

Despite the crisis, and Spain reaching a near bail out position, the Society has not only increased its individual membership over the last four years but also gained growing support from the corporate sector. The ‘crisis’ has forced the Society to ‘up its game’, improving its organisation from communications and events through to our scholarship programme. At the same time, businesses see us fulfilling an important task of providing a creative space in which cultural and social contacts between the two countries can flourish in a non-political environment, and as a result we have increased our level of corporate support.

KITE: How do you envision Spain’s position within the UK market in the short term and long term?

JBM: Several leading Spanish companies and banks have major investments in the UK. At the same time, there is a growing presence in London, in particularly small and medium sized Spanish enterprises, in sectors like design, fashion and restaurants. Spain meanwhile remains an investment opportunity for British concerns, as well as an important destination for British students. Spain’s position in the UK market remains potentially strong and I am sure it can and will flourish.

KITE: Due to the Society’s aim to promote British-Spanish friendship and understanding is there any area of business or sector between the two that you think shows great potential?

JBM: We believe that cultural exchanges in its broadest sense- from football to art- provide huge scope for cooperation, which can be mutually beneficial. Britain and Spain are countries with rich traditions but also proven capability to be innovative and set new trends. One should never forget the global importance of the Spanish and English languages so that we are talking here of a potential that goes way beyond national frontiers.

KITE: In 2008, the Society began awarding yearly scholarships in a range of industry fields including medicine, engineering, physics and architecture, as well as, in the arts, music and literature to both Spanish and British nationals. Between the two countries the education sector is one of the strongest sectors, with the UK being the top destination for Spanish students and there are over 90 accredited UK schools in Spain. Along this sentiment, what were the main reasons behind the launch of the scholarship program

JBM: As a registered UK charity, our scholarship programme is central to our identity and mission, as well as being a model of good practice partnership between a not-for-profit organisation and business. Faced with record levels of youth unemployment, particularly in Spain, the Society wanted to bring renewed hope by unlocking the potential of young minds, channelling investment into the future by supporting research, investigation and learning we believe will be of benefit to both the UK and Spain, and be an inspiration to move forward. Our scholarship programme shows the Society working at its best and most positive, helping raise funds from our principal supporters, all companies with a significant international profile and important presence in the UK and Spain.

KITE: Spain is generally known for having low levels of English capability when compared to their European counterparts. How, if so, does this affect Spain’s ability to integrate within international business as it becomes increasingly based in English?

JBM: A growing number of young Spaniards are coming to the UK not only to seek work but also improve their English precisely because they see how important the English language is within international business. By acting as a cultural and social network for British interested in Spain and Spaniards interested in the UK, the Society provides a good environment in which people can meet and improve their language skills. But there is still scope for improvement in the extent to which English is taught at all levels within Spain.

KITE: The BritishSpanish Society publishes the La Revista magazine every trimester and beyond displaying cultural notes of Spain and the UK, it aims to showcase the identity of the Society. In addition, the Society has social and cultural events such as the Society’s Gala Dinner in mid-March, in which Esperanza Aguirre was a guest speaker, epitomising the dynamic potential of a Spanish and British blend. In this sentiment of Spanish-British unity what final message would the Society like to convey to the readers of The Daily Telegraph?

JBM: In the BritishSpanish Society we try to set aside politics and look at a creative space where the peoples of both countries can meet and project the best of each other. Our bilingual magazine La Revista is our flagship. Its contributors are high quality British and Spanish writers, and the topics covered show the rich creative potential of both countries –their football players, their best universities, their literature, their fashion, their gastronomy, their painters and musicians. I am delighted that in 2014, we are celebrating two great universal cultural icons, the great British dramatist Shakespeare and the great Spanish painter El Greco!

You can find an application form on our Membership page 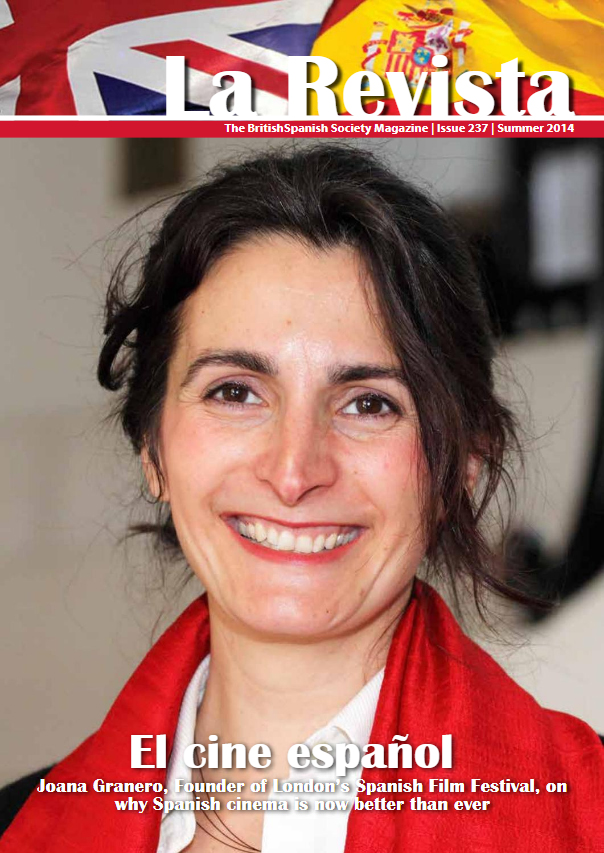