Fernando Gutiérrez has returned to his roots in West London. He has anchored his award-winning graphic design studio in the Bayswater area where he was born in 1963. As a child of Asturian and Galician immigrants he grew up in both cultures, moving from an English school in the daytime to a Spanish one in the evenings. In History classes at both institutions, he soon learnt the “contradictions” of two different views of the world, which have influenced him ever since. He assimilated those contrasting perspectives of the world with the same ease as he now develops design and corporate projects for Spanish, British and other international clients.

Examples of Gutiérrez’s work fill the walls and desks of his HQ in Great Western Studios, a peculiar building that stands just underneath the Westway and is sandwiched between Regent’s Canal and the railway access to Paddington Station. Red wine from Galician and Catalonian bodegas, a stylish bottle of oil produced from the olive groves of Vicente Todolí, former director of the Tate Modern, are on view in two connected rooms that look onto a patio. A café on the ground floor functions as a social venue for the independent art and craft enterprises of the enclosure. On the shelves of the studio are columns of art books that he has designed over the years, first as partner of the highly influential Pentagram international design firm and since 2006 as head of his own Fernando Gutiérrez Studio. On the walls hang posters with distinctive company logos and there are leaflets of old and recently opened exhibitions, such as ‘Estuary’, that marks the 10th anniversary of the London Museum Docklands.

Gutiérrez is now working on the catalogue ‘raisonné’ of the late Spanish artist, Juan Muñoz, while also researching designs and structures for a forthcoming show on Italian fashion for the Victoria and Albert Museum. But first of all he switches on his iPad to explain the flow and mechanism of a new application for the Prado Museum, in Madrid. He has acted as image consultant for the home of Velázquez and Goya for over a decade and has lately designed a digital version of its collection for tablets and mobile phones, that was launched a few weeks ago. “It is Apple’s favourite app”, he says with tremendous pride.

Do you feel British, Spanish or both?

I definitely feel Spanish by blood. I am very grateful to my mother for forcing me to go to Spanish school as a child, which gave me a great curiosity to later discover Spain. As a profession I chose graphic design very early on – when I was 13 years old I already knew what I wanted to be – and had a very good education in design in London. I moved to Barcelona when I was 27 years old and was able to put into practice everything I had learnt here. I had a very romantic idea of Spain at that time and it was a great journey of discovery. It was 1989 and there was genuine excitement about the Olympics that were held there in 2012. Design is about preparation, about the future, about seeing things and I could see what was being prepared and how everyone was on the same page, from product designers to architects, photographers and planners. They were all talking about a new city and a new country.

Am I right to think that El País newspaper’s youth supplement, Tentaciones,
launched in the early nineties, was your big break?

Yes, Tentaciones was the beginning for me. I wanted to discover Spain and what better way to reach my dream than through a youth cultural publication. I still love magazines but I was obsessed with then at that time. I was very lucky; I had worked in a project in London that never happened with an amazing man, Bruce Bernard, the then picture editor of The Sunday Times. He wanted to do a magazine about the beautiful things that happen in this planet. He showed me how to work on the presentation of a magazine, why and how we were doing a special publication. There was no money, I was a student and didn’t get paid. But he gave me something better. He paid me with a passion for the image, the editorial world and the power of communication that has never left me. So when the El País project came along I was so hungry and had so much knowledge of magazine design that I got the job in the first interview.

What was it about the design of Tentaciones that made it have such a strong international impact?

Immediacy and directness. It was not pretentious and it was pure communication. It had no style to begin with but of course that became a style at the end.

Co-operation with fellow artists and long term relationships with clients are two aspects that define your studio. Any reasons for this method of working?

Graphic design is always about working with people. You get a commission, normally to sell or communicate something. It is not about me but about making that thing look beautiful and good. Other designers do it themselves. I prefer to work with good photographers, illustrators, programmers… I always hire different people because for me the relationships are what matters most. You nourish one from the other. At the same time, it is important to establish long relationships with clients. You improve and the job gets better and better. The Prado is a good example. When it all started in 2002 I didn’t think that I would still be working with them today. We have built a very nice relationship. I have helped them establish a very strong identity that works culturally and commercially for the museum. It’s an identity that reflects integrity, clarity and an attitude. The Prado is an historic museum but it is bringing the past into a contemporary context as well.

How do you face the challenge of the digital world? Is it a big change?

Not really. For me the transition is even more fluid. Digital is about intuition, fluidity and naturalness. You don’t need anything complicated. In fact, the more uncomplicated the better. New technology has to be and feel natural. It’s got to flow and that’s what I do with my graphics. Whatever I work on has to be a natural flow. Sometimes it is a physical flow as in a book or an exhibition where you have to move effortlessly through the pages or the rooms. A bottle of wine is still a natural flow for me because you have to open the box and get the capsule out before you take out the cork. All these steps have to flow nicely. The labels, on the other hand, have to inform or to stand out. They are graphic and commercial flags that have to compete.

So basically just the tools have changed?

The tools and the technology have changed but the feeling remains. Design is all emotion. There is a basic emotion that we respond to as human beings. Man needs to express himself, needs to mark his territory, needs an identity… and the beauty of graphic design is that it is all about identity.

It surprises me that you work for potentially competing companies within the same sector. Isn’t that a problem?

I don’t think they should mind because I transmit what the client is and what they are thinking. I re-filter it but essentially it’s them, it links to their character, to what they are proud of. The character of each client comes through in each job we do.

It must be a difficult task to evaluate?

It is very hard to evaluate. For me, graphic design is a service. We are not artists, we are commercial artists. We get asked to work on something and we are not free. My talent in the studio is to communicate clearly whatever that service is.

Would it  be the same whether it were an orange or an exhibition?

It requires thinking, an idea first. It is thinking graphically about how to sell the product and how to make it look beautiful. The work varies a lot in corporate identity but essentially each company has very clear values and also very clear aspirations.

You often talk about an exhibitor as being like a book in 3D. Can you expand on this?

An exhibition is like a book that you go into and discover things. If it is well done it is memorable and stays with you forever. I love exhibitions. It allows me to take things into three dimensions, which is very exciting. With online I feel the same; it gives me more possibilities. 2D is very dangerous today as it requires good printing, good binding and transportation, whereas in digital you do it and it is there on screen for everybody to see. You avoid a lot of steps that we worry about in the 2D arena. A client might like a design for a book catalogue, for instance, but that does not make me happy. At that stage we’ve only reached half way through the project. It makes me happy when the book arrives and it is perfect. That’s when I celebrate. Paper is a luxury and will become more of a luxury. I don’t think we can afford to print on paper so often. It would soon be finished, so everything on paper is very valuable.

What about newspapers and magazines? How do you see the future of the printed media?

All that just goes online, onto the screen. We can’t afford paper. It’s not only that we can’t go on chopping trees, but mainly that we can’t afford people and that ink is the most expensive liquid in the world. A swimming pool full of ink is dearer in price than a pool full of champagne, wine or whatever liquid we might choose. Ink is the big rip-off at the moment. It is where the greatest expense goes. The other problem is the human side. Binding is finished. Good binding is like a handmade suit and only certain people can buy a bespoke suit. A good book is almost impossible to get nowadays.

Have you ever felt an outsider in the professional sphere?

No, because I’ve always been in two cultures. At home we spoke Spanish but I went to an English nursery and had to learn another language. In graphic design the beauty is the same. There is something new to learn in every job. And not only the language. Language is not a problem. We’ve just done an exhibition in Qatar, with the layout in Arabic.

Is there a cultural difference between Spanish and British companies?

Yes, there is a big difference. They work in different ways, have different ways of being, of etiquettes, of protocol. It’s all done to culture. There are differences but essentially they all are cultural. 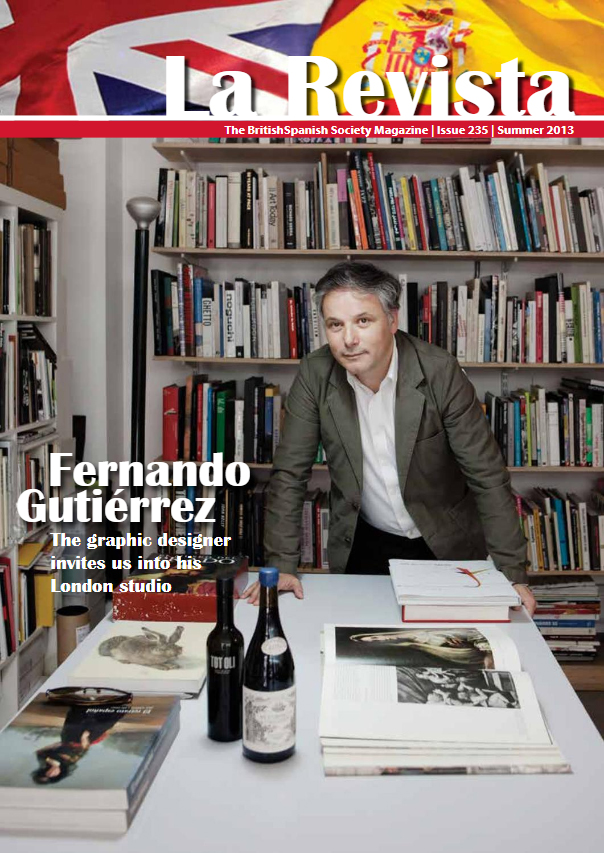 Our Chairman awarded with the Encomienda del Mérito Civil