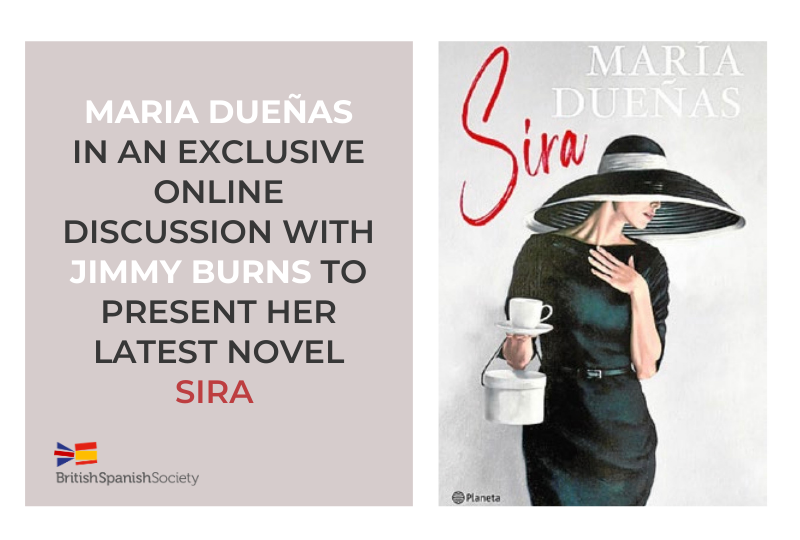 The writer has agreed to an exclusive online discussion with author and journalist and BSS chairman Jimmy Burns on May 6th to mark the publication of her latest novel Sira, the long-awaited sequel to El tiempo entre costuras (The Seamstress) with which she broke into the international literary scene in 2009.

Sira is the fifth novel to be published by Dueñas . A professor of English Language and Literature at the University of Murcia, she came into the spotlight in 2009, achieving great success in Spain thanks to her first novel, El tiempo entre costuras, published in English language as The Time in Between and The Seamstress, a historical espionage novel, which sold more than a million copies.

Her new novel takes its title from the main woman character in, El tiempo entre costuras. She finds herself embroiled a new story of intrigue that takes place in Jerusalem, London, Madrid and Tangiers after World War Two, involving her in secret work for the British.

Follow Sira´s journey around London in the following article written by our Chairman, Jimmy Burns Marañón OBE, that will take you in a vivid travel to the end of the 1940´s. You will be visiting places that remain as relevant now as they were back then. Read here more about Sira´s London journey

Her other published novels, all best-sellers and translated in numerous languages, are The Heart Has Its Reasons (Misión Olvido) (2012), The Vineyard (La templanza) (2015), and Las hijas del Capitán (2018).

The TV adaptation of El tiempo entre costuras earned critical and international acclaim. The novel’s publication in the UK was marked in December 2012 by the first BritishSpanish Society ‘In Conversation’ between Dueñas and Burns, whose late father, an attaché in the British embassy in wartime Madrid, appears among the characters.

If you book and are then unable to attend, we hope you don’t mind if we treat your payment as a donation to the charity, due to the administrative time it would take us to refund this relatively small amount.

Not a member yet? Click on the following link to Become a member.

Kindly consider supporting the BritishSpaish Society with a small voluntary donation so that we can continue our important mission of building bridges and promoting cultural links between Britain and Spain. We are very grateful for your support. Thank you!