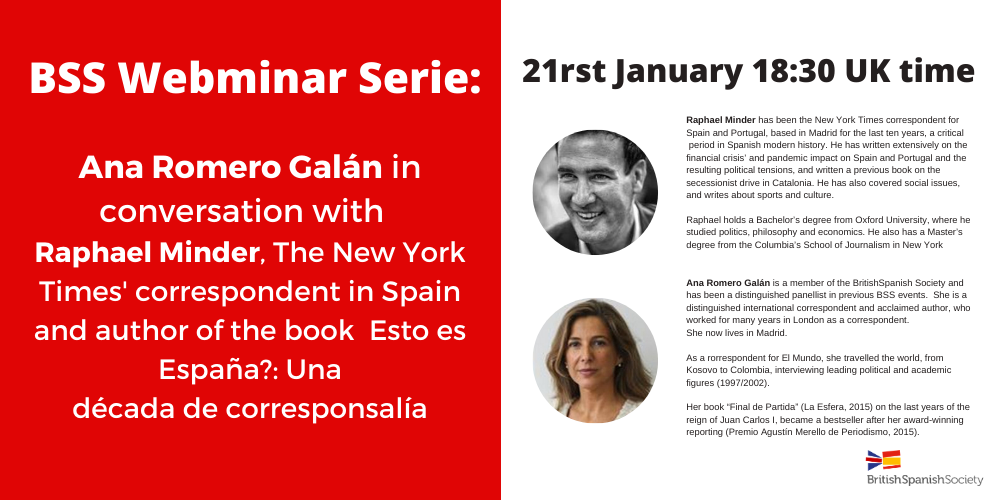 Raphael Minder:Raphael Minder has been the New York Times correspondent for Spain  and Portugal based in Madrid for the last ten years a,  critical  period in Spanish modern history.  He has written extensively on the financial crisis’ and pandemic impact on Spain and Portugal and the resulting political tensions, and written a previous book on the secessionist drive in Catalonia. He has also covered social issues, and writes about sports and culture. Born in Geneva, Raphael has been a full-time journalist since 1993, when he started working in Switzerland for Bloomberg News. He spent 10 years as a staff correspondent for the Financial Times, working in Paris, Brussels, Sydney and finally Hong Kong as the F.T.’s Asia regional correspondent.Raphael holds a Bachelor’s degree from Oxford University, where he studied politics, philosophy and economics. He also has a Master’s degree from the Columbia’s School of Journalism in New York.

Ana Romero Galán  is a member of the BritishSpanish Society and has been a distinguished panellist in previous BSS events.  She is a distinguished international correspondent and acclaimed author, who worked for many years in London as a correspondent. She now lives in Madrid.

Tickets:  £5. Students, Concessions and OAP:  £2
If you book and are then unable to attend, we hope you don’t mind if we treat your payment as a donation to the charity, due to the administrative time it would take us to refund this relatively small amount.
Not a member yet? Click on the following link to Become a member.

We look forward to seeing you on Thursday 21th January at 6:30pm UK Time!