Nothing like being a bicultural (British-Spanish) European citizen in a rowdy pub in south London to experience the high and lows of an  England-Spain  football match at Wembley.

Let me say from the outset  that my well-known enthusiasm  as an author for Spanish football had me in a minority of two  in a pub that last Saturday was packed to the rafters with mainly young well tanked English males determined to drink as much beer as possible and back the home team.

The pub and most of Wembley  were of course euphoric  when 11 minutes after kick-off England scored. In fairness I was also full of admiration  for an English goal that in its build-up execution reminded me of some of the best I had watched in the good days of La Roja, Real Madrid, and Barca.

It was a reminder of the great advances in English club and national football which has moved from its pedestrian , long-ball game to one of possession and creative passing and movement, thanks in no small measure to the lessons brought to the Premier League by Spanish managers and players. England,  which long ago brought football to Spain, has turned from teacher to pupil, at least when it comes to football.

It also showed the positive influence on the modern game of   England’s intelligent and noble young manager Gareth Southgate whose young bloods did much better than anybody expected in the recent World Cup.

The  England goal, probably the best in the match, – a slick  finish by Marcus Rushford after a brilliant exchange of passes had cut through the Spanish defence –  suggested for an instant that the Spanish national team and its goalkeeper de Gea   had not yet banished the bad omens  that haunted them during their disastrous World Cup campaign.

And yet the mood in the English pub –and in Wembley- soon moved from general  elation to temporary numbness when Spain began to resurrect  its own best colours , with man-of-the match Saul ‘s equaliser. From then on the team put together by Spain’s new manager Luis Enrique seemed to play to its strengths,  finessing the art of  football as poetry in motion, while upping the tempo and pressing the opponent, with its fluid defence and mid-field play, and flexible and predatory strike force.

Spain’s domination and superior skills were personified with the sight of a player like  Real Madrid’s  Isco being unsuccessfully challenged for the ball by three English players, Barca’s  Sergio Busquets’  calm authority in midfield,  and Thiago Alcantara’s devilish whip on his free-kick which made Spain second and  Rodrigo’s winning goal possible.

Of course there is nothing that England fans like better than an underdog rallying and putting up a courageous patriotic fight.  As the match reached its finals stages, English players played increasingly rough and tough, earning more yellow cards than their opponents. Their fans, unfairly in my view,  blamed Spanish theatrics and the bias  of the Dutch  referee.

The  criticism exploded in a series of collectively aired expletives when the Dutch official penalised Danny Welbeck for a foul on  de Gea , and disallowed a goal claimed by the entire English squad and its manager. Such was the abuse and anger in the pub, that I had to silence my own opinion that it was indeed a foul, and commiserate.

In the end, as my English expatriate companion visiting from Spain Dominic pointed out,  the competitive  match proved quite  a battle, and more entertaining than the more insipid nature of a ‘friendly’.  It was also not short of noble humanity  –such as when England captain Harry Kane cane out into the stadium with his team before the match began holding the hand of a young boy  who had suffered a brain tumour.  For all the Spanish and English flag waving, there was also  thankfully a striking absence of racist abuse and nationalist political slogs.

But hard as England tried, its team was just not good enough to come out winning from this first venture into the newly created European Nations League competition. Perhaps there was an  analogy with Brexit, or maybe not. 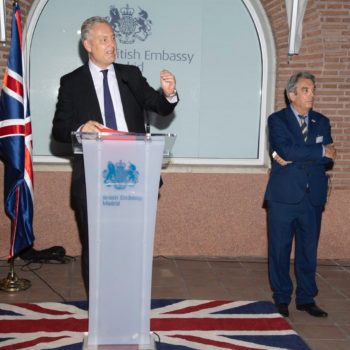