From its origins in foreign policy to the educational, social and cultural focus of the present day, the BritishSpanish Society has a rich and varied history. In commemoration of the Society’s centenary, historian Luis Martínez del Campo takes us through the key moments from 1916 to 2016.

In the early 20th century, culture became a key component of international relations. Many countries realised how useful cultural propaganda campaigns were for diplomacy. France and the UK founded educational corporations to contribute to their foreign policies: l’Institut Français (1922) and the British Council (1934). The Anglo-Spanish Society (now the BritishSpanish Society) is an interesting example of how those pioneer institutions became involved in foreign affairs.

In 1916, the third centenary of William Shakespeare and Miguel de Cervantes’ deaths, which were both in 1616, was commemorated as “another happy tie” between Spain and England. The governments of both countries scheduled events and implemented different projects to pay homage to “the two great literary glories”. As part of these celebrations, the Anglo-Spanish Society was founded to strengthen mutual understanding between the people of both nations. John Macdonald Mackay (1878-1961), Emeritus Professor at the University of Liverpool, became the principal promoter of the association. He implemented the project at the University of Oxford, where he could take advantage of the many contacts he had from his student years.

The next stage of the process for founding the association at a national level took place in London. On November 15, 1916, a meeting was held at the St. Ermin’s Hotel of Westminster. Key figures from leading British universities attended and a preliminary committee was appointed. King’s College London was well represented with two professors, Ronald Burrows (1867–1920) and Israel Gollancz (1863–1930), serving as Chairman and Honorary Secretary respectively. These two scholars sought businessmen who could support the Society. In April 1917 they appointed a provisional Executive Committee, chaired by Lord Latymer (1852–1923), a well-known Hispanophile.

The creation of the Society coincided with the Great War (1914–1918) and this conflict determined the purpose of the association. Its short term purpose was to garner the Spanish-speaking countries for the allied cause, but the Society also fostered British trade links with Latin America, at a time when the US dominated the Latin-American market. Therefore the association assumed two tasks, an economic one and a political one, in line with the Foreign Office’s policy for the Hispanic World. Although its aims were political and economic, its strategies were based on cultural understanding. This new organisation supported the teaching of Spanish language and culture in Great Britain through its branches in several universities and cities in England and Scotland. For this reason, many scholars and intellectuals (Professor James Fitzmaurice-Kelly, Ramiro de Maeztu, William Paton Ker…) joined the Society. Moreover, businessmen and bankers participated in the Economic and Social Section of the association, which endeavoured to put British entrepreneurs in contact with Spanish-American diplomats. Informal and formal meetings were held to bring together different agents who were involved in British trade with Spanish-speaking countries. The Chilean diplomat Agustín Edwards Mac-Clure (1878–1941), who was honorary president of the general headquarters of the Society since 1919, was one of the promoters of these gatherings.

The Society was established to support British foreign policy during the Great War, but functioned most effectively in peacetime. The end of the conflict brought stability for the institution, which carried on even when its ties with the Foreign Office were cut. The association had already started to grow, setting up branches in Oxford, Cambridge, Liverpool and Glasgow. Most of these regional branches were linked to universities in order to accomplish the Society’s educational mission. For instance, the association contributed to the founding of the King Alfonso XIII Professorship of Spanish Literature, which was established officially at Oxford University in 1927.

The Society was restructured during 1924 to 1925, the main purpose being to ensure its stability and continuity. Nevertheless, activity was minimal and the organisation’s branches grew apart from the London headquarters. The decline of the institution came in the late 1920s, particularly during the Great Depression in 1929. The Hispanic and Luso-Brazilian Council assumed the functions of the Anglo-Spanish Society, which reduced its activities in the late 1930s. World War II caused the end, with a dissolution of the Society in 1947. Henry Thomas (1878–1952), a well-known Hispanist and librarian at the British Museum, became the last chairman to hold the post at that time.

In 1950, an Anglo-Spanish League of Friendship was founded, but its dynamic was different from the Anglo-Spanish Society. It was no longer intimately related to the British Foreign Office, but rather it followed the policy articulated by the Spanish Embassy in London, leaving the subject of Latin America aside. Another important change was the creation of the Quarterly Journal, which was introduced in August 1951. Among the Spaniards who helped to found the League was Mabel Marañón Moya (1918–2008), daughter of the doctor Gregorio Marañón. Although she did not hold a political position, Marañón Moya’s contribution was essential in the creation of this new association.

During its first stages, the League faced many financial problems and, under the influence of Spanish diplomacy, its activities were politicised. Everything changed in 1958. In that year the League was rebranded as the Anglo-Spanish Society, but, above all, the association was creating its own socio-cultural space, where members have interacted for decades. John Balfour (1894–1983), a former British Ambassador to Madrid, was appointed chairman. He and other members created a stable administrative framework.

In the 1960s membership increased progressively, corporations sponsored the association’s activities and its finances were much more stable. These improvements allowed members to schedule a great number of social events and to promote Spanish culture in London, which became the Society’s field of action in the second half of the 20th century. Without doubt Nan Baxter, honorary secretary of the association from 1956 to 1977, was a key driver of the Society’s success in this period.

The end of the dictatorship and the transition to democracy in Spain had a significant impact on the Anglo-Spanish Society, which was updated to better deliver on its mission. The Society was committed to its educational and social aims, but at the same time it started a legal process which would enable it to become a registered charity, that is, a non-profit organisation with philanthropic goals. In this last period, members pursued exclusively pedagogical and cultural objectives through events, publications and an important scholarship scheme for students, scientists and artists from both Spain and the UK. The association was modernised in many ways, for example, women were progressively involved in leading the organisation. In 2009, Denise Holt became the first woman to hold the Chair position. In addition to this, Jimmy Burns, the current chairman, contributed to the launch of the Society’s new magazine: La Revista, which is now edited by Amy Bell.

The history of the BritishSpanish Society perfectly exemplifies the importance of cultural elements in foreign affairs and particularly in the evolution of British-Spanish relations throughout the 20th century. The Society has lasted because it has adapted over time. Far from being obsolete, the institution is still in good health after 100 years and hopes to continue in its mission to promote “friendship and understanding between the people of Britain and Spain” for a long time. 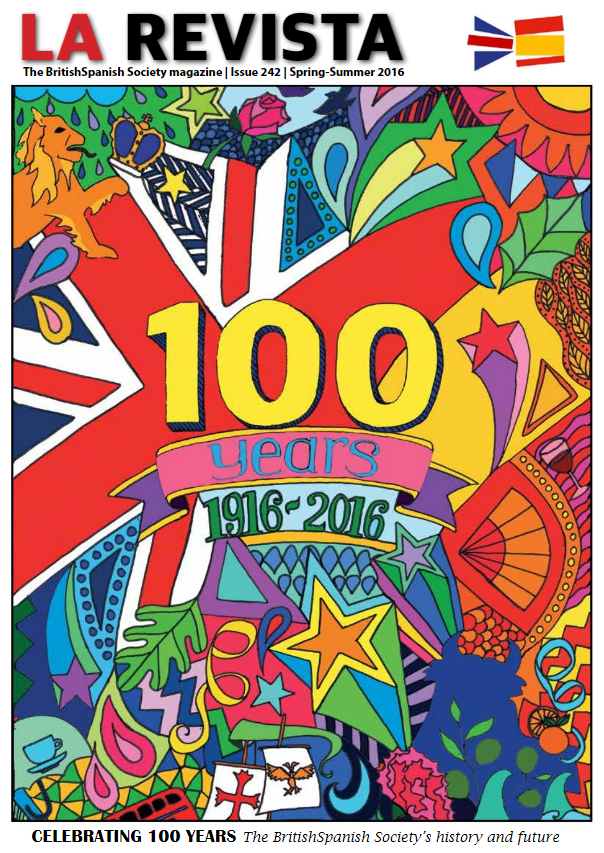