I wanted first of all to thanks His Excellency the Spanish ambassador, and honorary president CARLOS BASTARRECHE for generously hosting this event. I hugely appreciate the support he had shown towards the Society since his arrival in London.

Many thanks too to Our long-standing principal supporters Santander Universities, BBVA, and Telefonica whose enduring support over the years has made them pillars of our charity. Thanks to Mahou San Miguel who joined our award scheme ln 2016 with an innovative idea of supporting projects in the gastronomic sector which have become such a key art to cultural trade relations between Spain and the UK. And last but by no means a special welcome to the latest company to become a principal supporter the innovative Plastic Energy, the world’s leading chemical recycling company with its technology HQ in the Innovation Centre, London, UK, and industrial plants in Almeria and Seville, Spain, building bridges and tackling waste pollution in our land and oceans, aims with which our charity happily identify with.

Thanks to those in the British Spanish Society who have worked so hard to make this scholarship programme possible, and have helped
organize today’s event led by our Trustee responsible for scholarship Marian Jimenez Riesco and Alvaro Cepero our events and scholarships secretary. Thanks to Marian’s team- Miguel Fernandez Longoria, Dame Mary Marsh, Francisco Molina and further scientific advice provided by our supporting institution , SRUK, the Society of Spanish Researchers in the United Kingdom, Francisco Molina, and Maria Soriano our development secretary, and Julian Barcena, Cristina Alvarez , David Hurst and Silvia Montes, members of Executive Council, and my fellow Trustees- Juan Reig, Pepe Ivars, and Carmen and Scott Young.

Thank you for coming. It is so good to see such a good representation here of Patrons, corporate and institutional partners, and members as well as new friends from academia and business beginning to take an interest in the BritishSpanish Society. It is good to see among our distinguished guests here Sir Roger Fry of the King’s Group, the chairman of NHS England Professor Malcolm Grant, Ignacio Peyro from the Cervantes Institute and such a good turn out from the Spanish embassy, not least Miguel Oliveros of the Cultural & Scientific Office, whose enduring support we hugely appreciate. We would not survive also without the hard work of our volunteers and underpaid administrative staff and the moral support of those who help, with their generosity, our fundraising.

Since its inception in 2008, the British Spanish Society has had the pleasure of awarding Scholarships and Bursaries to over 50 post-graduate students conducting research in fields as diverse as medicine, urban planning, engineering, linguistics, literature, physics, architecture, marine archaeology and music. It may not be the best of times in terms of short and medium term certainties for students and universities but we are trying our best to help where we can confident that we are building on solid as well as necessary ground. This is the ninth annual presentation of the British Spanish Society Scholarships. And next year we shall be marking an important milestone in our history our 10th anniversary of the scheme celebrating our latest awards and gathering old alumni and their supporters with a major Gala Dinner.

I cannot stress enough how critical is continuing and growing corporate and individual philanthropic funding for the survival of this programme which is the center piece of our mission as a charity. This year we received over 150 applications from quality British and Spanish students but we were able to award only six scholarships.

We would very much like to expand our scholarship programme as we believe it plays an important role in furthering links between our two countries and showing how important is research and investigation and shared knowledge and expertise for the future of Europe. There are some academic fields we currently cannot cover because of lack of finds such as history, linguistics, economics, theater, fine arts and theatre among other-it would be good to have philanthropists and companies sharing the social responsibility of our current principal supporters by investing in this programme. In these days of fake news and bad news, we have a true and good story to tell. This partnership of our charity with socially responsible representative leaders in the private sector is based on a belief that universities and talented students –researchers, investigators, and creators, have a vital contribution to make to successful, dynamic civic societies in the UK and Spain. We want Britain and Spain to continue to be magnets for talent from each other’s countries, and become leaders in international collaboration that can benefit society as a whole.

Since our foundation in 1916, the aim of the British Spanish Society as a charity has been to build bridges of cultural and educational understanding. At a time of uncertainly our scholarship programme has never been more necessary, providing access to research networks as well as funding, and thus attracting high quality students.

I wanted to draw to an end by taking this opportunity to congratulate one of our guests here this evening Dr Mike Short on his new appointment as chief scientific adviser the Department of International Trade. For many years Mike has been a stalwart of the Society both as a loyal and enthusiastic member as well as in his role as VicePresident of Telefonica a huge supporter of the scholarship programme- a real inspiration and example to us all. I can think of no better note to end on. 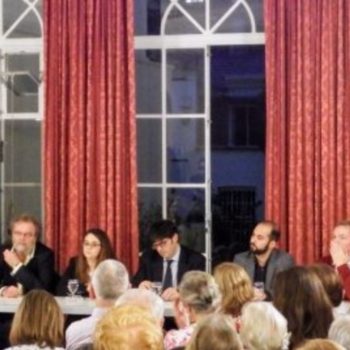 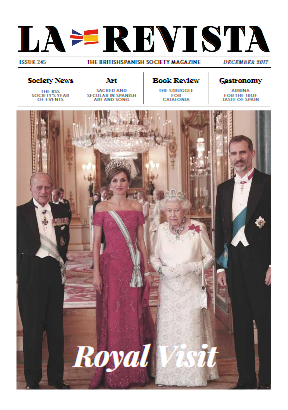