Brexit: A Leap in the Dark

On June 23 this year the UK made one of the biggest decisions in recent history: to leave the European Union. The real consequences for the future of the country are as yet unknown, but the result (51.9 per cent voted leave, 48.1 per cent voted remain) has had a major impact since it became public, not only for British citizens but for those born outside the country who, according to the Migration Observatory at the University of Oxford, make up 13.1 per cent of the UK’s population.

The morning after the referendum everyone had an opinion on what had happened. Brexit will change the current rules and affect the lives of many. Laura Gran talked to people from different backgrounds to understand their reactions to the result.

Occupation: Director of Professional
Development at the Royal Pharmaceutical Society

Location:
Catherine has lived in London for 28 years

“I was quite shocked to find that my family voted Brexit. I come from an Irish family, I have an Irish passport and am the child of immigrants, and very much a Remain voter, but I kind of understand it. The public in the UK is generally quite quiet and reserved but at the moment they are very angry with politicians. All the country feels that it is run too much from London, which is a very different place to anywhere else anyway. They feel unheard, they feel unlistened to, frightened about the world in general and about immigration specifically: the numbers of refugees and potential for more from places like Turkey. The translation of all of that into a referendum vote, which is a very simple ‘should we stay or should we go’, meant that those complex issues were not dealt with properly. So it is very insulting for many people to be called racist or ignorant or stupid if they voted to get out when they feel that they have reasons that are not racist, stupid or ignorant. We all have to have a think about that. My personal view is we are very very wrong to have voted that way. I feel we need to be part of Europe for all sort of reasons that include safety, security, the whole United Nations issues… We need to remember that Europe had wars before we ever had a European treaty.

Did it affect me emotionally? Very much so. I was really shocked on that day and I am probably still angry. I have Irish citizenship, I have an Irish passport, I have an EU passport and do not want a British one because I am Irish/European, which doesn’t mean I am not proud of Britain. I was born in this country but now Ireland has such a complicated problem, with the border and the peace treaty and all of that. They are going to have to put the border back in, which a hundred years ago caused a civil war. Even for my own family who live in Ireland, this is going to be huge. That as a consequence of this vote is massive. Everywhere there is an impact. I understand from a Spanish, Italian or French perspective Brexit feels big but actually even within the closest countries, this is very traumatic”.

Nationality:
María Jesús is Spanish and Robert is British

Place of birth: María Jesús in Ágreda, Soria (Spain) and Robert in London

Location: The couple married in 2014 and live in London

María Jesús: “Cameron went to the elections promising a referendum and I think it is fair he did it. I do not think the timing was right. The result was emotionally shocking. I was not forced to move to London; I came here because it was easier and quicker than going to the United States to improve my English. Some British people think all European immigrants come to the UK because they are forced to, and that is not true. Perhaps we have better opportunities here in the way career paths go but we could also decide to move away and it would be a loss for the country. When British people go to Spain to live they call themselves ‘expatriates’, but they call Spanish people living here ‘immigrants’. That is arrogant to me.”

Robert: “I found it strange that they were willing to put the country at such an economic risk, and at the risk of losing all the best talent. For me the result is terrible. I woke up to watch the results and could not go back to sleep after Brexit was declared. I think if they go ahead with it, this country will get weaker and will isolate itself away for Europe and the rest of the world.

Brexit probably makes me more determined to move, I have seen a really unpleasant side to my own city: what people say, what people do, how they are treating each other…  it is not somewhere to be happy right now. We have a problem with people who have a small island mentality.”

Location:
Almería. David moved to Spain in 1985. He worked as Academic Head of various schools and colleges

“I do not think the result of the referendum will affect me personally in any way. I have been living here long enough to feel more Spanish than British. I cannot vote in general elections, but I have my pension, social security… I paid contributions for many years. I do not have dual nationality but I would apply for it if I felt it would be an advantage for me.

Sometimes some of my British friends living here in Spain ask me for advice, or practical help when the language barrier presents difficulties. I know from conversations with them that they have some concerns, especially in the area of healthcare. If Brexit were to affect health-care agreements between the two countries, they say that it might well influence their decision to live in or even visit Spain. Many of my (Spanish) ex-students are now local businesspeople. One, for example, is an estate agent, and has commented that Brexit has affected sales to British nationals. And those who put down a deposit on property prior to Brexit insisted on an extra clause in the contract giving them the right to back out and recover their deposit if the vote were to leave the EU.

There are others who work in the agricultural sector – the major business activity in Almería which, at certain times of the year, produces 70 per cent of the horticultural products consumed in the EU. The UK is a major customer. They are concerned that when the UK leaves the EU this may adversely affect these trade relations, which would have serious consequences on the area’s economy”.

Occupation: Founder of te.chie.la, an IT company he set up in London in 2015: https://te.chie.la/

Location: London, having moved with Telefónica in 2013 as a step forward in his career

“Although I had an indefinite contract, I came to London thinking I would be here for one or two years, just to improve my English, and after that I would go back to Spain. Now, though, I will not leave unless they kick us out – I guess I am comfortable here. I decided to set up my own company in the UK and not in Spain because of the legal regulations for self-employed workers. In the UK I don’t have to pay a cent if I do not have a turnover. I can also be an employee of the company and have my own salary as if I were a typical worker. In Spain I would have to pay my contribution, at least 300 euros a month, regardless of whether I earn money or not.

I agree with the decision to call a referendum because people should voice and define what they want, but I do not agree with the result. It was shocking. I think the referendum was more focused on racist propaganda than on economic figures, I am not sure people were adequately informed. At the beginning I took it badly and considered going back to Spain because I felt that the UK does not want us here. Brexit also worries me because I will need to hire people in my company and it will be difficult to do it if the UK closes its doors. What opportunities will there be in my sector if we need trained people and are not able to find them?”

Place of birth: Caudete, in Albacete, and Cuenca (Spain)

Status: They moved to London in March 2016 to improve their English

Cristina Requena:
“Most foreign people who live in the UK get the jobs that British people do not want. If they wanted them, they would get the positions because they speak the language much better than us. I guess perhaps the British are tired of people who want to live here for the rest of their lives because they cannot earn a decent living in their birth countries. Perhaps they feel that we are an invasion… After the referendum I was scared of verbal abuse. I read on Twitter: ‘Europe rats, go back home’. One day on the bus the bus driver said to two girls: ‘If you are going to speak that shit language, go upstairs’. This kind of thing is shocking, but I hope things are calmer now.”

Manuel Saiz: “I have always considered English to be important in order to travel and to get a better job. We lived in London from March until May this year and will go back to the UK in October but to a smaller city, probably Manchester, because London is very expensive. I worked that period of time in the kitchen of McDonalds and none of my workmates were English so we learnt very limited vocabulary. The other problem is that we did not have the chance to make English friends so all the English we learnt was at work, in the supermarket or in dealings with the bank. The current situation does not affect me much because I do not plan to stay in the UK longer than one year.” 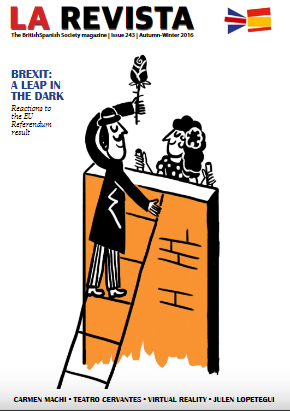