Ballet Nacional de España’s highly esteemed director speaks to Graham Watts, chairman of the Dance Section of Critics’ Circle and National Dance Awards about Suite Sevilla, and how he trained dancers to perform flamenco on ice.

Antonio Najarro exudes a palpable aura of celebrity. With thick, dark hair that stands to attention (albeit rather wavily) around the crest of his forehead, piercing brown eyes and a carefully sculpted, barely-there beard, Najarro could be from the worlds of film, fashion or pop. And, in a sense, being one of Spain’s most celebrated flamenco dancers could be said to combine all three and more.

Having made it to the top as a dancer, Najarro now creates choreographies for others to perform. He began his own company (Compañia Antonio Najarro) in 2002, the same year in which he choreographed the ice dance routine that captured gold medals for Marina Anissina and Gwendal Peizerat at the Salt Lake City Winter Olympics; and he became the director of the Ballet Nacional de España in September 2011, following on from the second spell of José Antonio’s august leadership.

I met Najarro in a backstage dressing room, just an hour before the curtain was to go up on a double bill comprising the flamenco puro in Antonio Canales’ choreography for Grito; followed by the glitzy, showbiz finale of Najarro’s own Suite Sevilla. Having had such an extensive and eclectic career, Najarro could still easily pass for one of the young bailaors I passed in the corridor on the way to his dressing room.  In reality, he was on the cusp of turning 40, when we spoke.

In my review of an earlier performance of Suite Sevilla, I described Najarro’s production as “…entertainment writ large; a seaside special, but one themed for Málaga, not Blackpool.   It may not have been flamenco but it was certainly fun.” And now, sitting in front of the creator of such fun, it didn’t take long to absorb his ebullient, infectious zeal for making entertainment. Just one question did it.

I asked him why his shows tend to follow the same pattern of contrasting flamenco puro with a souped-up, Las Vegas style that mixes all the flavours of Spanish dance. “I love that you tell me that”, Najarro’s voice rises in an immediate exclamatory response. “Many of our shows will merge pure flamenco with my dynamic style of choreography.  And, in this finale, I always want to showcase different styles of Spanish dance; and certainly not just flamenco”.

Suite Sevilla contains a rich variety of Spanish dance forms, including escuela bolero, a dance form that emerged from Castilla-La Mancha  in the 18th century and appears now as a hybrid; classical ballet from the waist down while maintaining the peculiar torsion and unique elegance of traditional Spanish poses in the upper body.

The size of Ballet Nacional de España is always an important consideration. “With 80 performers, we are the biggest dance company in Spain”, notes Najarro, adding: “so, it’s especially important for me to create quality work for the cuerpo de baile and by that, I mean work that is both technically challenging but also – and this is very important – full of expression. It’s the spirit that’s very important to me”, continues Najarro.  “That’s why I work very close to the dancers, trying to make them feel the energy that I want to be shown on the stage”.

His philosophy of presenting a stylistic potpourri of Spanish dance makes finding new recruits a tough call.  “We have some of the best flamenco and escuela bolero dancers in Spain and – as a company – we can cover all the styles of Spanish dance; but finding dancers who can make more than one style look convincing is extremely difficult”.

Najarro has no doubt that the biggest challenge for his company – indeed, for dance around the world – is to lure new devotees. “And, to do that, audiences have to be attracted by the show”, he argues. “Technical ability and the quality of the drama and expression cannot be separated from one another, nor can they be seen in isolation from the commercial aspects. It all has to be joined up. Drama and expression must come through the body language but if it isn’t commercial then we are all looking at a lost art”.

His emphasis on visual spectacle and theatricality has made Najarro a natural for ice dance. He was just 25 when the French world champions (Anissina and Peizerat) asked him to choreograph a flamenco programme for the 2002 Olympic Games. “I found it very difficult to begin with”, admits Najarro, “not least because flamenco on ice is a contradiction, since the dance form is percussive with all the weight on the floor and that is not for the ice!”

“But, they needed the flavour of flamenco, more than anything”, recalls Najarro.  “So, I was working with them for two years before they won the gold medal and from there I just carried on. Now, I’ve choreographed for many skaters – the best skaters in the world. I’ve also created several entire galas featuring Olympic and world champions”.

Najarro’s successful formula is based on making dance before stepping on the ice. “When I work with skaters, I always treat them like real dancers”, he explains. “If I work with them for one year, then the first three months will be in the studio because I need them to understand the movement and feel the passion and theatre of the dance.  We only go on the ice after this lengthy preparation in the studio. The challenge for me is to make them forget the mechanics of ice skating; the very movements that are instinctive to them. It is always very difficult but in the end the result is amazing if they can look like real dancers on the ice”.

He laughs when I ask if he is a skater, too. “I have skated a little but to tell the truth I was always scared of injury because for dancers, ice skating is not so good!” But I love it, I love working with skaters and I love the whole environment of the skating competitions”.

For the next winter Olympics, Najarro’s success as an ice dance choreographer has brought a triple Salchow of contenders as he is developing routines for three couples (from Russia, America and Spain). “They are winning medals in all the tournaments, so things are looking good”, he concludes.

Sorolla, a new dance show commissioned by Najarro for Ballet Nacional de España, inspired by Joaquín Sorolla’s Visión de España paintings for New York’s Hispanic Society (in 1911), premiered in Najarro’s home city of Madrid, during the summer. And, as I write, the company is enjoying a successful tour of Japan that concludes on the day after Najarro’s 40th birthday (22 November). “We tour a lot”, he says. “I’m very happy because I think that people around the world are understanding my message, which is very important to me”.

This returns us to the theme at which we began. “Of course, I’m trying to express myself and be creative but I believe that we have to entertain people. I enjoy expressionism and abstract work if it is done well but we have to make show business”, stresses Najarro.   “There are many choreographers who have an idea that is so personal that the audience doesn’t understand it.  When you go to the theatre, you have to feel something.  Maybe you don’t understand the work but you have to feel it!  It’s OK to be challenged – that’s fine – but at the end of the day you have to provide entertainment. People get frightened to watch ballet and flamenco because they don’t understand the terminology and I try to make it accessible”.

“When I created my own company, in 2002, I was 27 and we were 30 people. We had nine musicians playing live and all the costumes were handmade. I invested all the money I had in the company and I had no choice but to create a commercial show with quality. It had to be my style, my dream, but if it wasn’t commercial – if it wasn’t show business – then people would not come again and they would not tell their friends to come.  My company would have been dead within a few months”.

In fact, Compañia Antonio Najarro was a great success but it had to be moth-balled, after nine years,  when its leader came to direct Ballet Nacional de España: “Understandably, the Ministry of Culture wanted me to concentrate all my energy on the national company”, he explains.

I leave so that Najarro can quickly brief his dancers before the show, impressed by a determined man with a clear artistic vision; a creative polymath, working across – and blending – different styles of dance; a proud and energetic influence on the cultural life of Spain; but, above all, here was a man of the people; a showman who turns dance into spectacle, whether the stage is made of wood or ice. 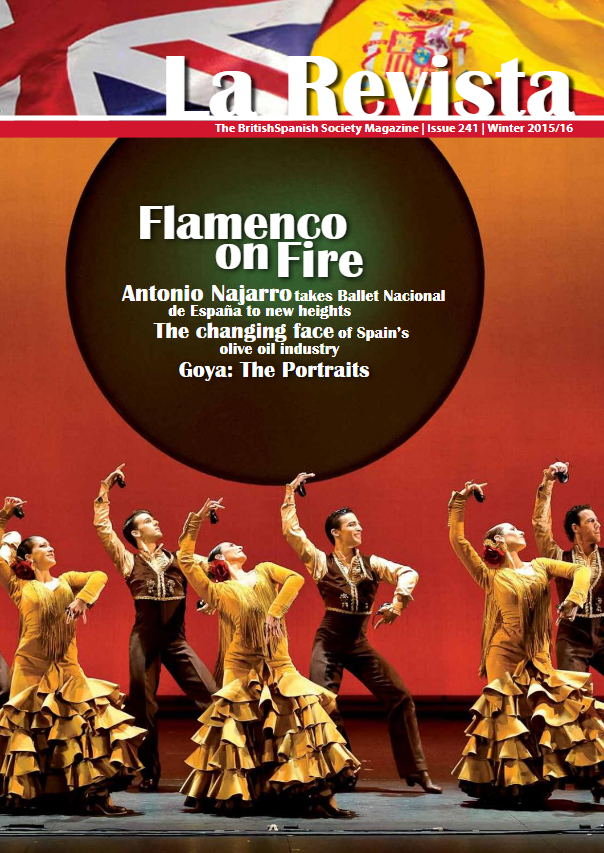 Merry Christmas to all of our members and supporters