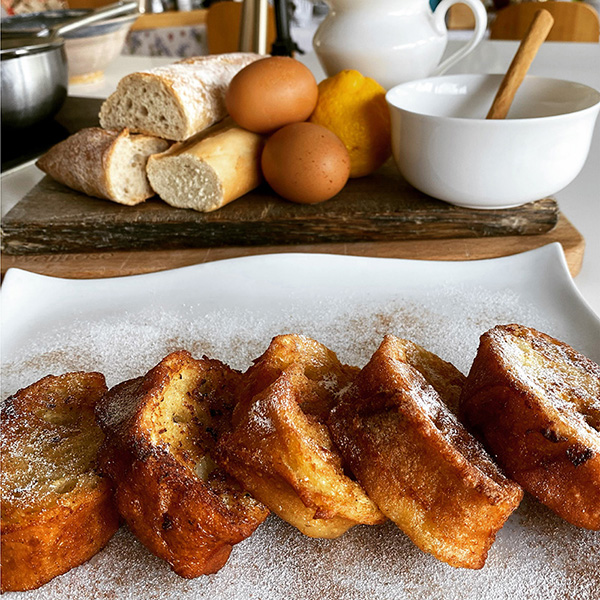 Optimism and revival are two words I love to associate with the most beautiful and productive time of the year, Primavera in my language. This is a perfect moment to travel in Spain with an apron and a wicker basket, looking for recipes to prepare and new food and wine stories to tell. 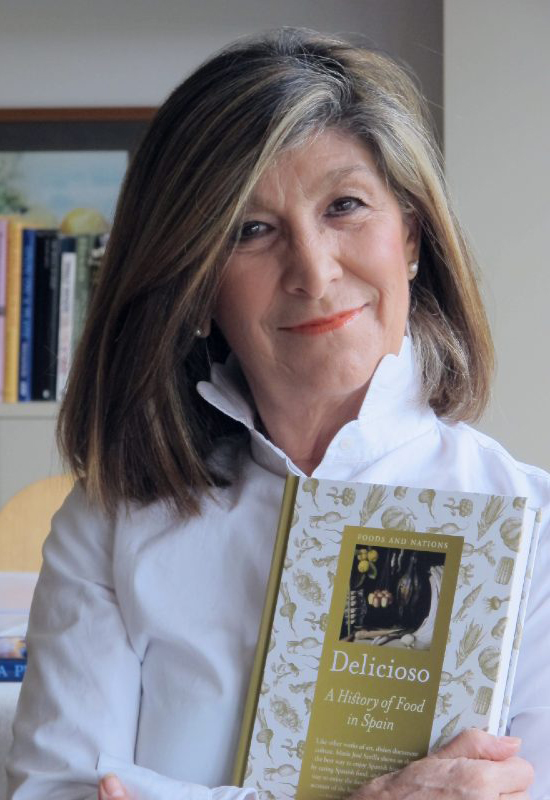 I travelled to Bilbao by ferry. My pleasurable journey in search for a seasonal menu, started in the Basque Country where a selection of the local wine Txakoli, and Rosados from Navarra were ready for tasting at a local restaurant. I was offered a small tapita of fresh anchovies fried in olive oil and Guisantes de Primavera con Jamón essentially ‘Fresh peas and ham’.

I also tried a Menestra de Verduras made with artichokes and pink cardoon, my favourite vegetable of all time. Travelling quickly across Cantabria where I would be stopping before returning to England by ferry from Santander, I reached Cudillero, a picturesque Asturian fishing port.

This is a part of Spain of stunning beauty, good food, sidra and capricious weather. Local cooks and chefs, prepare many traditional fish dishes such as Lubina a la Sidra which I decided to include as a main course of my menu, before turning back towards Santander.

I looked for something sweet which is easy to find in a town where milk puddings are speciality: Arroz con leche and Leche frita among many others. The owner of a patisserie at the centre of the town mentioned that soon they would start offering the Torrijas de Semana Santa, The Holy Week historical recipe cooked all over Spain. In London I prepare Torrijas every year following the recipe I have included in the menu.

Come early Spring, in local weekly markets in The Basque Country and Navarre, bags of minute fresh peas and little broad beans without their pods, are sold by farmers selling their garden products to passionate cooks. This is the time to eat them, not as an accompaniment to meat or fish, but as a good portion at the centre of the plate.

Sautee the onions very gently in olive oil until translucent. They should not take any colour. After 10 minutes add the cebolletas or Spring onions and after another 10 minutes the lettuce and the chopped ham. Add the flour, stir well and then add the fresh peas and the sugar. Add some of the ham chopped and sautéed for a minute in a frying pan. Start adding the boiling water, little by little, stirring continuously to dissolve the flour until the peas are just covered by the water. Once they start boiling, cover and cook until tender. Add the rest of the ham and serve with a good glass of Txakolí from Guetaria or a young Rosado from Navarra. 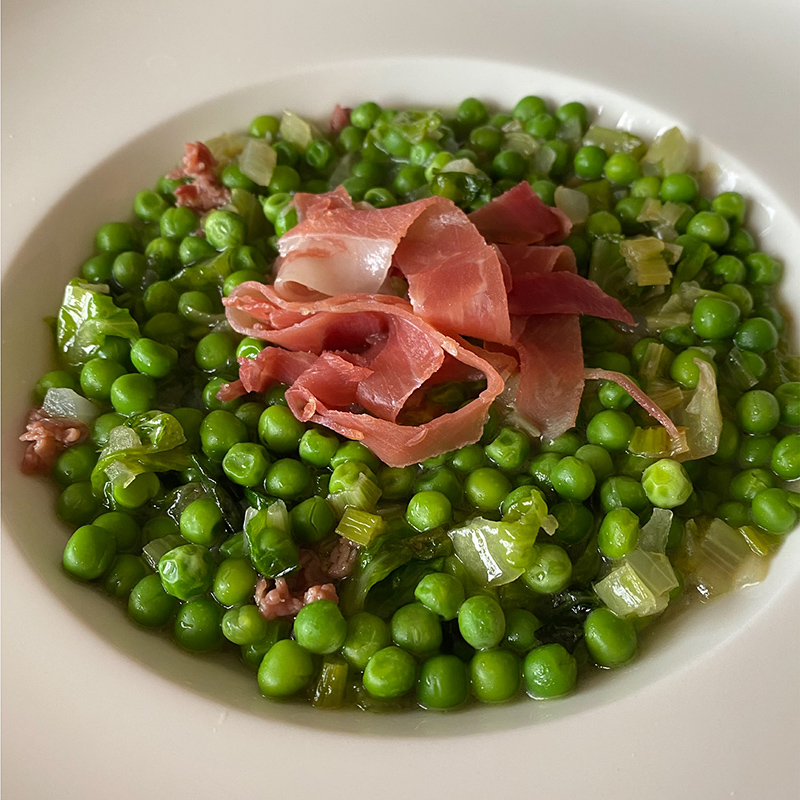 Fresh Peas a la Vasca or a la Navarra

All along the Spanish coast numerous seafood dishes following the same recipes prepared at home and in restaurants, are often served in the traditional earthernware cazuelas de barro. In Asturias local ciders are often used as a major ingredient that imparts delicious flavours.

Heat the oven to 180 degrees C. Following the traditional way, I have used a large earthenware ‘cazuela’ but any oven proof dish will do the job well.

To prepare the sofrito, gently sautee the onions and garlic in a deep frying pan. When they have become translucent add the grated tomatoes. Carry on cooking at a moderate heat until the tomatoes own liquid has almost evaporated. Add the cider, blend and return to the heat. Cook gently until the cider has been fully integrated in the sauce. Let cool down, sieve and reserve

Season the fish. Place in an ovenproof dish or cazuela. Drizzle a little olive oil on the fish. Cook in the oven for about 10 minutes. Pour the tomato sofrito on top and continue cooking in the oven for another 5 minutes. Meanwhile, using a small frying pan and very little oil, sautee the prawns until they are just taking colour before placing them in the cazuela together with the clams. Cook for another a few minutes to allow the clams to open up. Do not overcook the fish, the clams or the prawns. Serve with the same cider. 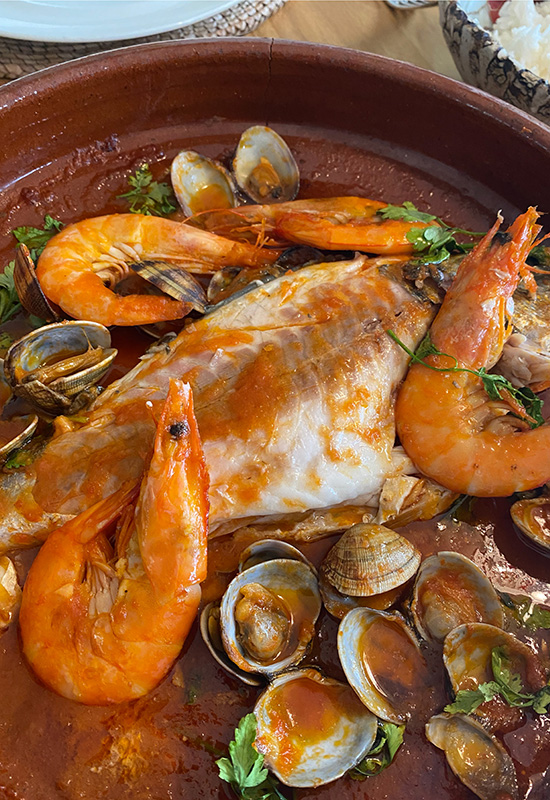 Torrijas are one of the many sweet treats you can find during Holly Week all over Spain. They are prepared by home cooks or sold in patisseries, bars and restaurants. Depending on the region, you will find them made with wine or milk, coated once fried with syrup or just sugar and cinnamon, I love this recipe which learned in Cóbreces, in Cantabria, where the milk and milk puddings and desserts are superb.

Heat the milk (do not let it boil) with 2 tbs. sugar and the wine. When dissolved, remove the milk from the heat and add some lemon peel, vanilla pod and a small stick of cinnamon. Allow the milk to be infused for several minutes. Remove the lemon, vanilla and cinnamon stick and transfer into a large rectangular dish.

Start placing slices of bread in one layer and cover with the milk. Add another layer and do the same until all the slices have been well soaked. Leave it to rest for a few minutes.

Beat the eggs. Heat the olive oil and when hot, but never smoking, start adding the milky torrijas coated in egg. Do not overlap them in the pan. You will need to turn them once or twice when they start taking colour. Remove and place them in kitchen tower. Serve warm or cold sprinkled first with the blend of sugar and cinnamon powder. Serve with a sweet moscatel wine from Málaga. 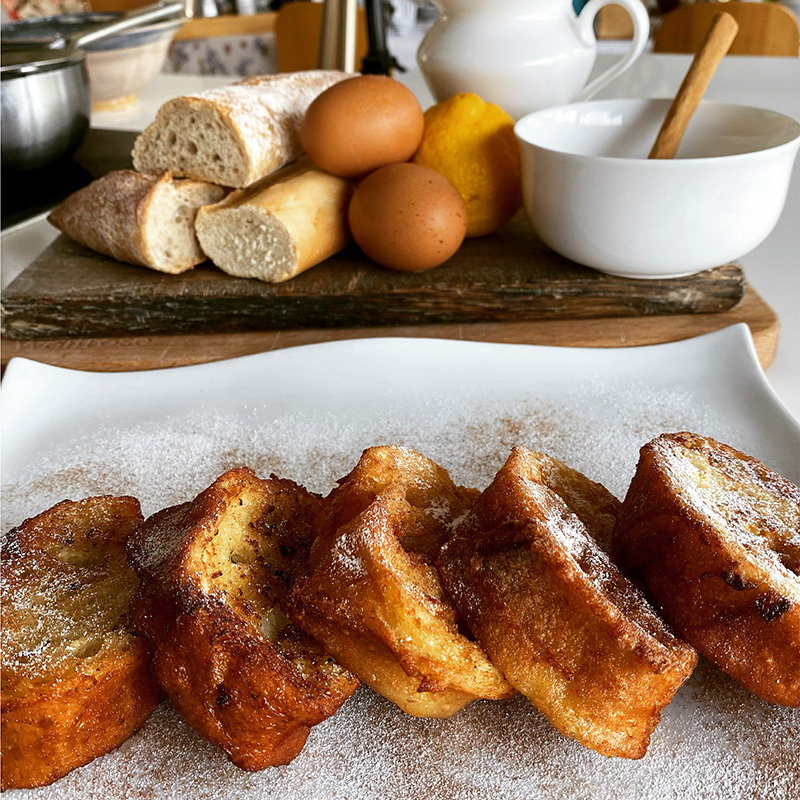 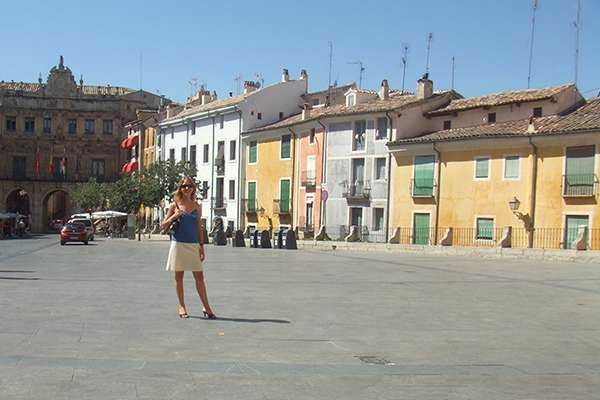 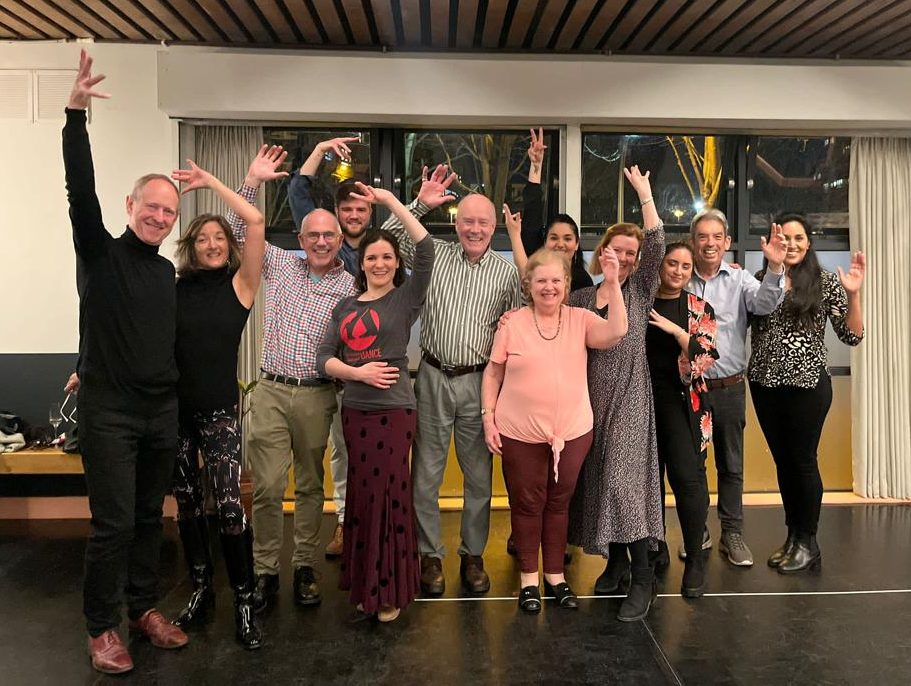